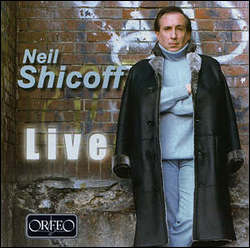 Neil Shicoff (born June 2, 1949) is an American Jewish opera singer and cantor known for his lyric tenor singing and his dramatic, emotional acting.

Neil Shicoff was born in Brooklyn, New York. He studied at the Juilliard School of Music, with his father, the hazzan Sidney Shicoff and others, including Franco Corelli in the early 1980s. He sang in small theatres in New York before music school, including a Don Jose in Bizet's Carmen at Amato Opera and small roles at Juilliard, and was an apprentice at the Santa Fe Opera in the summer of 1973. His professional debut as a tenor lead in a big opera house was in the title role in Verdi's Ernani, conducted by James Levine in Cincinnati in 1975.

In 1976, Shicoff made his debut at the Metropolitan Opera as Rinuccio in Gianni Schicchi conducted by Levine. Shicoff was then engaged by the Met to sing the tenor leads in Rigoletto, La Bohème, Der Rosenkavalier, and Werther, which was to become one of his signature roles. He soon sang in the major opera houses in the U.S. and Europe, winning great notices and recording some of his roles. Shicoff experienced severe stage fright well into his career, which caused him to cancel a number of performances. He was known to be a perfectionist, carefully researching and preparing each role, both dramatically and vocally.

In 1978, Shicoff married fellow Juilliard graduate, lyric soprano Judith Haddon. After the death of his mother in 1984, Shicoff suffered emotional problems, technical vocal difficulties and increasing performance anxiety. He cancelled numerous performances, and by the end of the 1980s he had developed a reputation for unreliability.

Shicoff continued singing at the Met for two years, but in 1991, he left America, fleeing the stresses and headlines engendered by his ongoing divorce proceeding and custody battle concerning his daughter, into a self-described European exile. He lived for three years in Berlin, then Zürich, performing throughout Europe (with a handful appearances in Buenos Aires), and he slowly rebuilt his reputation for reliability. He appeared at Vienna State Opera, La Scala, Paris Opera, Covent Garden, Berlin's Deutsche Oper, Bavarian State Opera, Zurich Opera House and numerous other opera houses and concert halls throughout Europe.

By 1997, Shicoff and Haddon finally reached a divorce settlement. Their final decree left Shicoff free to marry soprano Dawn Kotoski, with whom he had lived since 1990, and to renew his relationship with his daughter, Aliza. Shicoff also returned to the Met, as Lensky in Eugene Onegin, to good notices. He has now been heard in nearly 200 performances of 20 roles at the Met.

Due to his personal friendship with the Austrian Federal Chancellor, Alfred Gusenbauer, Shicoff was widely expected to follow Ioan Holender as director of the Vienna State Opera (Wiener Staatsoper) in 2010. In a surprise decision and in defiance of Gusenbauer's publicly stated wish, Austrian Culture Minister Claudia Schmidt, however, appointed Dominique Meyer as director and Franz Welser-Möst as musical director on June 6, 2007.

Shicoff's most famous roles (besides Werther), include the title roles in Tales of Hoffman and Peter Grimes and Lensky in Eugene Onegin and Eleazar in La Juive, as well as for a number of the Romantic French and Italian lyric and spinto tenor roles. In addition to his opera performances, he has also sung concerts with the Israel Philharmonic conducted by Leonard Bernstein, the Berlin Philharmonic conducted by Claudio Abbado, the San Francisco Symphony conducted by Edo de Waart, and the Boston Symphony Orchestra conducted by Seiji Ozawa, among others, and at many festivals.

In recent seasons, Shicoff sang the roles of Cavaradossi in Tosca and Hoffmann at La Scala and Paris’ Opéra Bastille; Des Grieux in Manon Lescaut; Don José in Carmen at the Lyric Opera of Chicago and the Zurich Opera House and Eleazar in Halévy's La Juive at the Teatro La Fenice in Venice, with Wiener Staatsoper and the Zurich Opera House, Peter Grimes at the Teatro Regio di Torino. He has sung also Edgardo in Lucia di Lammermoor, the title role in Idomeneo, and Rodolfo in La bohème at the Wiener Staatsoper; Luisa Miller (Rodolfo) at the Met; Gabriele Adorno in Simon Boccanegra at Covent Garden and in Paris; Hermann in Pyotr Ilyich Tchaikovsky's 'Pique Dame'; and Manrico, Cavaradossi and Pinkerton in Madama Butterfly at the Zurich Opera House, among others. A regular at Wiener Staatsoper (where he attained the rank of Kammersänger and the rarely awarded honorary lifetime membership in the company) he continues to triumph mostly in the verismo repertoire, but in February 2011 he repeated his huge success in the role of Captain Vere in Benjamin Britten's Billy Budd which he sang in the company premiere of the opera in 2001.

This article uses material from the article Neil Shicoff from the free encyclopedia Wikipedia and it is licensed under the GNU Free Documentation License.