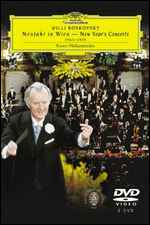 Willi Boskovsky (16 June 1909 – 21 April 1991) was an Austrian violinist and conductor, best known as the long-standing conductor of the Vienna New Year's Concert.

Willi Boskovsky was born in Vienna, and joined the Vienna Academy of music at the age of nine. He was the concertmaster of the Vienna Philharmonic from 1936 to 1979. He was also, from 1955, the conductor of the Vienna New Year's Concert, which is mostly devoted to the music of Johann Strauss II and his contemporaries.[1] Along with the Vienna Philharmonic, he was also the chief conductor of the Wiener Johann Strauss Orchester up until his death. A forerunner of this ensemble was the 19th-century Strauss Orchestra founded by Johann Strauss I in 1835. He died in Visp, Switzerland.

Boskovsky was also a Mozart performer: he recorded all the sonatas for violin and piano, with pianist Lili Kraus, and the complete trios for violin, piano and cello, with Kraus and Nikolaus Hübner for Les Discophiles Français. He played in Brahms' Double Concerto in A minor, Op.102, with Wilhelm Furtwängler conducting the Vienna Philharmonic.

His style appealed to many Strauss listeners as he directed Strauss' music in the manner of the "Stehgeiger", i.e. directing the orchestra with the violin just as Johann Strauss I popularised this form of conducting waltzes, polkas and other dance music alongside rival Josef Lanner in the early 19th century. This tradition was also carried on by Johann Strauss II and Josef Strauss after their father's death. Boskovsky was sympathetic to the Strauss style. Apart from the Strauss family waltzes, Boskovsky recorded a 10-album cycle of the complete Mozart Dances and Marches, leading what Decca Records called the Vienna Mozart Ensemble (assorted members of the Vienna Philharmonic). Many of these recordings were included on the Philips/Polygram Complete Mozart series of CDs issued in the 1990s.

Boskovsky's New Year's Day 1979 concert was recorded live by Decca, the first commercial use of their proprietary PCM digital system. The resulting 2-LP set was well received. Quoting Gramophone magazine: "This is a riotous issue ... the first recording to be manufactured and released in the UK utilizing digital recording ... astoundingly vivid and atmospheric ... the results are phenomenal." The album was most recently released as part of the Decca Legends series, remastered in 96k/24-bit PCM.

The Boskovsky Quartet and Vienna Octet made a number of recordings for Decca Records, among which are the following:[2]

This article uses material from the article Willi Boskovsky from the free encyclopedia Wikipedia and it is licensed under the GNU Free Documentation License.