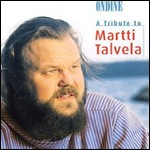 Born in Hiitola, Finland (now in the Republic of Karelia), he studied in Lahti and Stockholm, and made his operatic debut in Helsinki in 1960 as Sparafucile. At 203 centimetres (Expression error: Missing operand for * ), he was the tallest singer of his century. He trained as a boxer in his youth and developed the stamina necessary for the biggest roles. Originally Talvela was educated as a primary school teacher in Savonlinna, Eastern Finland (1952-1956), and he worked in that occupation at three schools (1957-1960). He sang at the Stockholm Royal Opera in Sweden from 1961 to 1962, before becoming a regularly employed singer at the Deutsche Oper (German Opera) of Berlin in 1962.

In 1970, the Senate (government) of West Berlin formally granted him the rank of chamber singer. He worked as the artistic leader of the Savonlinna Opera Festival from 1972 to 1979. At New York's Metropolitan Opera, he performed the role of Boris Godunov 39 times between 1974 and 1987.[1] He was especially acclaimed as the title character in Boris Godunov and as Pimen from the same work, as Paavo Ruotsalainen in The Last Temptations, as a Wagner singer (King Marke, Hunding, Fasolt, Fafner, Hagen (one critic described his Hagen as an "elemental force") and Titurel), as Sarastro, Dosefei, and Prince Gremin, as King Phillip II, the Grand Inquisitor and, in the later part of his career, the title character in Glinka's Ivan Susanin. As his final record he left, terribly thinned out by illness, a warm and heartfelt version of Schubert's Winterreise. He also left at least two recorded performances of Mussorgsky's Songs and Dances of Death one with full orchestra and one with piano accompaniment.

The combination of vocal depth, dark timbre, and sheer size made him stand out in every part he sang, and his bass seemed to extend effortlessly without the "break" that most basses have to resort to hit their low notes, and without losing richness on high notes. He was a fine vocal actor who always brought a certain air of lugubrious dignity to his roles, even to pure-evil roles like Hagen and the Grand Inquisitor.

During the last eight years of his life (1981 to 1989), he worked as a farmer on the Inkilänhovi (Inkilä Court) farm in Juva, Eastern Finland, while continuing his official career as an opera singer. His health had begun to decline in 1975, when he was diagnosed with diabetes and gout. In 1982 alone, he suffered two heart attacks at the Metropolitan Opera. Stomach problems also plagued him at times in the 1980s.[2]

Talvela died at age 54 while dancing at his daughter's wedding in Juva.[3]

This article uses material from the article Martti Talvela from the free encyclopedia Wikipedia and it is licensed under the GNU Free Documentation License.