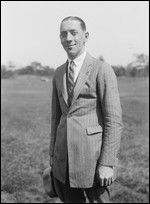 Joseph Russel(l) Robinson (July 8, 1892 September 30, 1963) was a United States ragtime and dixieland jazz pianist and a composer of jazz, blues, and popular tunes.

Robinson, whose name appeared as "J. Russel Robinson", was born in Indianapolis, Indiana. He started publishing ragtime compositions in his teens; his early hits included "Sapho Rag" and "Eccentric".[1] With his drummer brother John he toured the Southern United States in the early 1910s including an extended stay in New Orleans. He also turned out hundreds of piano roll recordings for the US Music Company in Chicago and later the QRS Company in New York. He was known for his heavily blues and jazz influenced playing style. His style has been described as having a swinging, shimmying style with many right hand only blues breaks.

In October 1918, he joined W. C. Handy's publishing company Pace and Handy, supplying new arrangements and lyrics for popular editions of tunes like "The Memphis Blues" in the 1920s. Robinson joined the Original Dixieland Jazz Band when pianist Henry Ragas died in the Spanish Flu Pandemic in 1919. Also in 1919, he co-wrote the song "Though We're Miles and Miles Apart" with W.C. Handy and Charles H. Hillman. He also played piano with various popular and blues singers in phonograph recording sessions, accompanying singers such as Annette Hanshaw, Lucille Hegamin, Marion Harris, and Lizzie Miles. On some of his accompaniments to African American singers the accompaniment was listed on the record labels as being by Spencer Williams (with Williams' permission).

Robinson's compositions for the ODJB in 1920, "Margie", "Singin' the Blues", and "Palesteena", released as a 78, were among the most popular and best-selling hits of 1920. "Aggravatin' Papa" was composed with Roy Turk and Addie Britt and was recorded by Alberta Hunter in 1923 with Fletcher Henderson's Dance Orchestra and also by Bessie Smith and Pearl Bailey. Robinson was a member of the ODJB until it broke up in 1923 and rejoined the band when it reformed in 1936.

Other popular compositions included the jazz standard "Eccentric" ("That Eccentric Rag" from 1912), "Jazzola" (1919), "I Got a New Deal in Love", "Swing, Mr. Charlie", "Sapho Rag", "Two Time Dan", "Mary Jane" with Andy Razaf, "Beale Street Mama", "I'll Be in My Dixie Home Again Tomorrow", "Aggravatin' Papa", recorded in 1923 by Bessie Smith and Alberta Hunter with the Fletcher Henderson Orchestra, Florence Mills, Pearl Bailey, and Sophie Tucker, "Palesteena", the classic "Margie", "Mary Lou", "Singin' the Blues", "Meet Me in No Special Place (And I'll Be There at No Particular Time)", recorded by Nat King Cole, and the title song for the movie Portrait of Jennie (1948). He also composed the blues classic "St. Louis Gal", which was recorded by Bessie Smith. Movies were also released based on his two compositions "Margie" ("My Little Margie") and "Mary Lou". The Margie television series which ran from 1961 to 1962 used his music as the theme. He composed "Rhythm King" with Jo Trent, under the pseudonym Joe Hoover, a song recorded by Bix Beiderbecke and His Gang.

The classic "Margie", written when Robinson was in the ODJB, has been recorded by Louis Armstrong, Ray Charles, Benny Goodman, Jim Reeves, Al Jolson, Cab Calloway, Gene Krupa, and Fats Domino, among others. According to Lewis Porter in John Coltrane: His Life and Music (1999), "Margie" was also a "specialty" of John Coltrane.

In 1957, while living in Palmdale, California, Robinson teamed with a young librettist/lyricist, Leo McElroy, to create the score for a musical entitled Mermaid Tavern which enjoyed a brief flirtation off-Broadway and continues to be considered and produced in regional theatres.

Robinson died of cancer in Palmdale, California in 1963 after a brief illness, during which he completed two new songs for Mermaid Tavern.

In 1977, Robinson's composition "Singin' the Blues" was inducted into the Grammy Hall of Fame in a 1927 recording by Frankie Trumbauer and His Orchestra featuring Bix Beiderbecke on cornet as Okeh 40772-B.

This article uses material from the article J. Russel Robinson from the free encyclopedia Wikipedia and it is licensed under the GNU Free Documentation License.