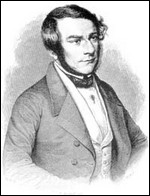 Born in Vienna, Johann Gabriel Seidl was the son of a lawyer and studied law himself. In 1829, he began to teach at a gymnasium in Celje, Slovenia. In 1840 he became curator at the Coin and Antiquities Museum (Münz- und Antikenkabinett) in Vienna. From 1856 until 1871, he was responsible for the treasury. He spent most of his life in Vienna and died there in 1875.

Besides his scientific studies, Seidl published numerous poems and short stories, including the first poems by Nikolaus Lenau. Many of his poems were set to music by Franz Schubert (e.g. "Die Taubenpost" from Schwanengesang) and Carl Loewe (e.g. "Die Uhr"). Besides having written poems in standard German, Seidl also wrote in the Austrian dialect.

This article uses material from the article Johann Gabriel Seidl from the free encyclopedia Wikipedia and it is licensed under the GNU Free Documentation License.