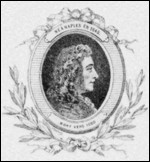 Antonio Alessandro Boncompagno Stradella[1] (Bologna, 3 July 1643[1] – Genoa, 25 February 1682) was an Italian composer of the middle Baroque period. He enjoyed a dazzling career as a freelance composer, writing on commission, and collaborating with distinguished poets, producing over three hundred works in a variety of genres.[2]

Not much is known about his early life, but he was from a Tuscan aristocratic family, educated at Bologna, and was already making a name for himself as a composer at the age of 20. In 1667 he moved to Rome where he composed for Christina, Queen of Sweden, mostly sacred music. He was involved in performances of four operas, two by Francesco Cavalli and two by Antonio Cesti. Stradella began to live a dissolute life. With Carlo Ambrogio Lonati he attempted to embezzle money from the Roman Catholic Church, but was found out: he fled the city, only returning much later when he thought it was safe. His numerous incautious affairs with women began to make him enemies among the powerful men of the city, and he had to leave Rome for good.

In 1677 he went to Venice, where he was hired by a powerful nobleman, Alvise Contarini, as the music tutor to his mistress, Agnese Van Uffele. She and Stradella began an affair and fled Venice together for Turin, where they were protected by Marie Jeanne Baptiste of Savoy-Nemours, the regent of Savoy.[3] Contarini followed and instructed the Archbishop that Uffele and Stradella must marry or that Uffele must take the veil. She did the latter, and then the two married in October; however, as Stradella left the convent after signing the contract, he was attacked from behind on 10 October by two would-be hired assassins, who believed him dead when they left him in the street. He was not. The two assassins took asylum with the French ambassador. That Contarini had hired the attackers became known, leading to complaints from the regent of Savoy to Louis XIV; the matter became a topic of negotiation between the courts. In 1678 Stradella fled to Genoa, where he met again with Lonati. He was paid to compose music for the local nobility and the Teatro Falconi.[2]

In 1682 he was stabbed to death at the Piazza Banchi. His infidelities were well-known, and a nobleman of the Lomellini family hired the killer that put an end to Stradella's life; but the identity of the killer was never discovered.[4] Stradella was buried in the Santa Maria delle Vigne.

Stradella was an extremely influential composer at the time, though his fame was eclipsed in the next century by Corelli, Vivaldi and others. Some of his music was exploited by George Frideric Handel, for example in Israel in Egypt. Probably his greatest significance is in originating the concerto grosso: while Corelli in his Op. 6 was the first to publish works under this title, Stradella clearly uses the format earlier in one of his Sonate di viole. Since the two knew each other, a direct influence is likely.

Stradella wrote at least six baroque operas [5] including a full-length comic opera Il Trespolo tutore. He also wrote more than 170 cantatas, at least one of which was based on a poem by Sebastiano Baldini, and six oratorios. Stradella composed 27 separate instrumental pieces, most for strings and basso continuo, and typically in the sonata da chiesa format.

He wrote two cantatas for the regent of Savoy, Se del pianeta ardente and Sciogliete i dolci nodi.[3]

This article uses material from the article Alessandro Stradella from the free encyclopedia Wikipedia and it is licensed under the GNU Free Documentation License.