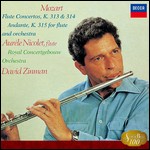 Aurèle Nicolet (22 January 1926 – 29 January 2016) was a Swiss flautist. He was considered one of the world's best flute players of the late twentieth century.

He was a flautist in orchestras in Winterthur and Zurich from 1948 to 1950. He was solo flautist for the Berlin Philharmonic Orchestra from 1950 to 1959. He Professor at the Academy for Music in Berlin from 1952 to 1965. He was head of the Master Class at the Freiburg Conservatory from 1965 to 1981.

In 1947, at the age of 21, he was awarded the Paris Conservatory’s First Prize for flute. In 1948 he won the First Prize at Geneva International Music Competition.

This article uses material from the article Aurèle Nicolet from the free encyclopedia Wikipedia and it is licensed under the GNU Free Documentation License.

Fritz Kreisler Sicilienne et Rigaudon im Stil von François Francoeur
Update Required To play the media you will need to either update your browser to a recent version or update your Flash plugin.