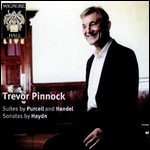 He is best known for his association with the period-performance orchestra The English Concert which he helped found and directed from the keyboard for over 30 years in baroque and early classical music. He is a former artistic director of Canada's National Arts Centre Orchestra and founded The Classical Band in New York.

Since his resignation from The English Concert in 2003, Pinnock has continued his career as a conductor, appearing with major orchestras and opera companies around the world. He has also performed and recorded as a harpsichordist in solo and chamber music and conducted and otherwise trained student groups at conservatoires. Trevor Pinnock won a Gramophone Award for his recording of Bach's Brandenburg Concertos with the European Brandenburg Ensemble, an occasional orchestra formed to mark his 60th birthday.

Trevor Pinnock was born in Canterbury, where his grandfather had run a Salvation Army band. His father was Kenneth Alfred Thomas Pinnock, a publisher, and his mother, Joyce Edith, née Muggleton, was an amateur singer.[1][2] In Canterbury, the Pinnock family lived near the pianist Ronald Smith, from whose sister Pinnock had piano lessons. He became a chorister at Canterbury Cathedral when he was seven, attending the choir school from 1956 to 1961 and subsequently Simon Langton Grammar School for Boys.[1][3] After receiving instruction in piano and organ, he served as a church organist; by the time he was 15, he began to play the harpsichord.[2] At age 19, he won a Foundation Scholarship to the Royal College of Music to study organ and he also studied harpsichord, winning prizes for performance on both instruments.[1][4] His teachers were Ralph Downes and Millicent Silver.[5] A strong early influence was Gustav Leonhardt, though he did not study with him.[4]

As a harpsichordist, Pinnock toured Europe with the Academy of St. Martin in the Fields.[6] While a student at the RCM, he was told by the registrar, John Stainer, that it would be impossible to make a living as a harpsichordist.[4] He made his London debut at the Royal Festival Hall in 1966 with the Galliard Harpsichord Trio, which he co-founded with Stephen Preston, flute, and Anthony Pleeth, cello. At this stage, they were playing baroque music on modern instruments.[4] His solo harpsichord debut was in 1968 at the Purcell Room in London.[7]

To maximise his possibilities for work early on in his career, he included in his repertoire not only the regular baroque repertoire, but also modern harpsichord concertos including Roberto Gerhard's concerto for harpsichord, percussion and strings, Manuel de Falla's concerto for harpsichord, Frank Martin's Petite symphonie concertante for harp, harpsichord, piano and double string orchestra and Francis Poulenc's Concert Champêtre.[5][8] Pinnock and Maxim Vengerov toured together in 2000, with Vengerov taking up the baroque violin for the first time and Pinnock taking up the modern grand piano. These concerts consisted of a first half of harpsichord and baroque violin, followed by a second half of piano and modern violin.[9][10]

In November 1972 the Galliard Trio expanded to become The English Concert, an orchestra specialising in performances of baroque and early classical music on period instruments.[4][11] The orchestra initially started with seven members but soon grew in size. The decision to move to period performance was taken for a number of reasons:[12]

What I really had in mind was a journey of discovery into the unknown. Although I felt there were excellent interpretations of baroque music performed on modern instruments, I sensed that we'd come to the end of the road – and yet I knew that there were still discoveries to be made. I was thinking about the interesting experiments made by Nikolaus Harnoncourt and Gustav Leonhardt, although I knew we'd have to experiment in our own way. It was a huge challenge; playing period instruments wasn't as easy as it is today, and finding out their secrets was a difficult process. Nowadays an extraordinarily high technical level has been achieved and the upcoming generations don't have any of the problems we pioneers faced. We cleared the way.

Pinnock was at the forefront of the period performance movement and the revitalisation of the baroque repertoire; the reaction of Leonard Bernstein to his performances is typical: "In my opinion, the work of the conductor Trevor Pinnock in this area is particularly exciting – his performances of Bach and Handel make me jump out of my seat!"[13]

The English Concert's London debut was at the English Bach Festival in 1973.[14] In 1975, Pinnock played the harpsichord in the first ever performance of Rameau's last opera, Les Boréades, under John Eliot Gardiner.[15] He toured North America with The English Concert for the first time in 1983; he had earlier spent two periods as Artist in Residence at Washington University, St. Louis.[5] His debut at The Proms was in 1980; he later directed Handel's oratorio Solomon in 1986 and many other large-scale works with his orchestra.[6] They toured worldwide and made numerous recordings, Pinnock directing "with a characteristic energy and enthusiasm which are readily communicated to audiences."[14] The Choir of the English Concert was at first an ad-hoc group of singers assembled as needed, originally in 1983 for the first 20th century performance of Rameau's Acante et Céphise; it became an established choir for a period from the mid-1990s at the time they were performing Bach's Mass in B minor. This allowed the ensemble to regularly perform baroque operas, oratorios and other vocal works; a series of Bach's major choral works followed.[16]

He directed The English Concert, usually from the harpsichord or chamber organ,[17] for over 30 years, deciding, with the other orchestra members, to hand it over to violinist Andrew Manze in 2003.[12][18] He explained the decision as follows:[19]

There are other things I want to develop – or rather come back to. Having done The English Concert for 18–20 weeks per year, and guest conducting the rest of the time, I'd sacrificed playing the harpsichord rather more than I wanted to. I had to make a decision to move forward: there were certain solo projects I wanted to do, and I wanted to make the decision now rather than wait until after I am 60 and it's too late to do half of them. [...] There's a wealth of keyboard repertoire I want to revisit. I especially want to go back to the rich English repertoire such as Tomkins, Byrd, Bull and Gibbons.

In 1989 Pinnock founded The Classical Band in New York, signing an 18-disc recording contract with Deutsche Grammophon before the ensemble's first rehearsal.[20] He led the group in performances of the classical repertoire from Haydn to Mendelssohn on period instruments, including playing as fortepiano soloist.[21] After a disappointing series of concerts, he resigned in 1990 and was succeeded by Bruno Weil.[22]

From 1991–1996 he was artistic director and principal conductor of the National Arts Centre Orchestra in Ottawa, a group he had first directed in 1985.[23] He subsequently served as its artistic advisor during the 1996–1997 and 1997–1998 seasons, including a tour of the US with the performance and recording of Beethoven's 1st and 5th piano concertos with Grigory Sokolov as soloist.[24] He has made occasional return visits to the orchestra since relinquishing his formal position with them.[23]

He made his Metropolitan Opera debut in 1988 conducting Handel's opera Giulio Cesare, the same year he made his debut at the Salzburg Festival with Handel's Messiah.[1][6] He conducted Opera Australia and Michael Chance in Handel's Rinaldo at the Sydney Opera House in 2005.[29] He also played William Babell's virtuoso harpsichord transcriptions with some of the arias (which Babell claimed were of Handel's actual improvisations).[30]

Since resigning his position with The English Concert, Pinnock has divided his time between performing as a harpsichordist and conducting both modern- and period-instrument orchestras. He has also taken an interest in educational projects.[27]

In 2004 he commissioned modern harpsichord music by English composer John Webb, whose Surge (2004) "is built up over an implacable rhythmic repeat-figure. Though neither is explicitly tonal, each skilfully avoids the merely percussive effect that the harpsichord's complex overtones can all too easily impart to more densely dissonant music."[31] He has also played the same composer's Ebb (2000), which "comprises a spasmodic discourse against a manic background of descending scale patterns like a kind of out-of-kilter change-ringing".[31]

He toured Europe and the Far East in 2007 with the European Brandenburg Ensemble, a baroque orchestra, formed to mark his 60th birthday by recording Bach's Brandenburg Concertos and performing popular baroque music.[32][33][34] Its recording of the concertos won the Gramophone Award for Baroque Instrumental in 2008.[35] The band was not a permanent orchestra, but planned to reconvene in 2011 when Bach's St John Passion was to be the focus of their work.[36]

Pinnock's educational work takes place both in the United Kingdom and elsewhere. It includes being principal guest conductor of the Royal Academy of Music's Concert Orchestra,[37] taking masterclasses or workshops at other British universities,[38] and conducting the orchestras of such establishments as Mozarteum University of Salzburg and The Hong Kong Academy for Performing Arts.[27] He has also taught a handful of harpsichordists including Lars Ulrik Mortensen, Nicholas Parle, Carole Cerasi and Julian Perkins.

Each original release is listed. Years are those of recording.[42]

Orchestral works with The English Concert

This article uses material from the article Trevor Pinnock from the free encyclopedia Wikipedia and it is licensed under the GNU Free Documentation License.

Ferdinand Ries Andante con moto aus der Sinfonie Nr. 8 Es-Dur
Update Required To play the media you will need to either update your browser to a recent version or update your Flash plugin.