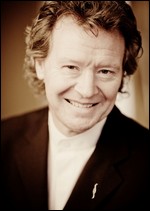 Harry Christophers (born 26 December 1953, Goudhurst, Kent) is an English conductor. He attended the King's School, Canterbury and was a chorister at Canterbury Cathedral under choirmaster Allan Wicks and played clarinet in the school orchestra alongside Andrew Marriner. He became an Academical Clerk at Magdalen College, Oxford, studying classics for two years before embarking on a musical career. He has cited as his childhood musical influences The Rolling Stones, Brahms, Mahler, Stravinsky and Jethro Tull.[1]

Christophers spent six years as a lay vicar at Westminster Abbey and then time as a member of the Clerks of Oxenford and three years in the BBC Singers. He founded the vocal ensemble The Sixteen during this time in 1979. He has directed The Sixteen and its orchestra throughout Europe, America and the Far East, gaining a distinguished reputation for his work in Renaissance, Baroque and twentieth century music. With The Sixteen he has conducted recordings for CORO, The Sixteen's own label and other labels including Hyperion Records, UCJ and Virgin Classics.[2] Several recordings have received honours such as a Grand Prix du Disque and a Midem award for Handel's Messiah, numerous Schallplattenkritik, the Gramophone Award for Early Music amd the Classical Brit Award 2005 for the disc Renaissance. The Sixteen's 2009 recording of Handel's Coronation Anthems earned a Classic FM Gramophone Award in the Baroque Vocal category as well as Artist of the Year honors for Harry Christophers and The Sixteen. The recording also earned Christophers a Grammy nomination for Best Choral Performance.

In 2000, Christophers began the "Choral Pilgrimage", a national tour of English cathedrals from York to Canterbury in music from the pre-Reformation era as The Sixteens contribution to the millennium celebrations. The success of the first Choral Pilgrimage led to subsequent annual ones devised around particular themes.[3] [4] As part of The Sixteen's thirtieth anniversary in 2009, the ninth Choral Pilgrimage was dedicated to the anniversaries of Henry Purcell, James MacMillan and George Frideric Handel.[5] [6]

In September 2008, Christophers was named the Artistic Director of the Handel and Haydn Society in Boston, beginning in the 2009-2010 season for an initial contract of three seasons.[7]

This article uses material from the article Harry Christophers from the free encyclopedia Wikipedia and it is licensed under the GNU Free Documentation License.