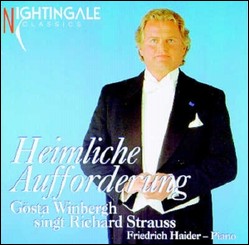 Winbergh was born in Stockholm. He is considered as among Sweden's and the world's finest tenors, included with Jussi Björling and Nicolai Gedda.

There was no musical tradition in Winbergh's family. He himself was a building engineer when he watched his first opera performance in 1967; the experience so moved him that he decided on an operatic career. Accordingly he applied for the opera class at Sweden's prestigious Royal Academy of Music, and was admitted on his first attempt. He trained at the school between 1969-71. He began singing at the Royal Opera in Stockholm, and gradually began to receive international attention in the 1980s when he guest performed on stages abroad. Copenhagen, Aix-en-Provence, San Francisco and in 1980, Glyndebourne, where he sang Belmonte, scoring a great success for his honeyed voice and elegant singing. He later worked several times at the opera house in Zürich and at the Metropolitan Opera in New York. His leading performances in Mozart's Don Giovanni, Wagner's Lohengrin, Verdi's Rigoletto and Puccini's Turandot were particularly well received and celebrated.

For the first two-thirds of his 30-year career, Gosta Winbergh was greatly admired as a singer of Mozart's operas. His Don Ottavio in Don Giovanni was applauded at the Metropolitan, New York, at the Salzburg Festival, in Houston and Chicago, Berlin and Barcelona. He sang Ferrando in Cosi fan tutte at the Drottninghom Court Theatre and Tamino in The Magic Flute for his debut at La Scala, Milan. Other Mozart roles in his repertory were Idomeneo, Mitridate and Titus.

He also sang lyric roles such as Almaviva in Il barbiere di Siviglia, the Duke in Rigoletto, Alfredo in La traviata, Nemorino in L'elisir d'amore and Lenski in Eugene Onegin. Then in 1991 at Zurich he sang his first Lohengrin, and a whole new career opened out before him, with further exploration of Wagner, the Emperor in Die Frau ohne Schatten, Don Jose in Carmen and Florestan in Fidelio.

In 1982 Winbergh made his Chicago debut as Ferrando, and his Covent Garden debut in the title role of La Clemenza di Tito, which was also much admired. The following year he sang the title role of Mitridate, re di Ponto at the Schwetzingen Festival, and made his Metropolitan debut as Don Ottavio. In 1984 he sang Tamino in Salzburg and Ferrando at Drottningholm, as well as Admetus in Gluck's Alceste in Geneva. In 1985, he performed as a soloist in Mozart's Coronation Mass at the Vatican for the Pope. He made his debut at La Scala in 1985 as well, singing Tamino, and returned there in 1990 for the title role of Idomeneo, repeating the role at Madrid the following year.

The year 1991 also found the tenor singing Jenik in The Bartered Bride in Bonn and returning to La Scala as Pylades in Gluck's Iphigénie en Tauride. However, the most important event for Winbergh that year was his first Lohengrin, in Zurich. Wisely not attempting a special Wagnerian style, he sang the role as if it were by Mozart, and the result was unbelievably beautiful. He repeated Lohengrin in Houston and Barcelona in 1992, and in May 1993 in Berlin he sang another new Wagner role, Walther in Die Meistersinger, which he brought to Covent Garden in October.

After the Emperor in Die Frau ohne Schatten in Zurich in 1994, Parsifal in Stockholm and Erik in Der fliegende Hollander at Venice in 1995, Winbergh introduced his Lohengrin to Rome and Paris Bastille (a concert performance because the stage hands were on strike) in 1996; he then came back to Covent Garden in 1997 with both Lohengrin and Walther. He had completely assimilated both roles by now and, with superb diction allied to his lovely tone and fine phrasing, the performances were highly enjoyable. In 1997 he also sang Erik in San Francisco.

Huon in Weber's Oberon provided a new role in Zurich in 1998, when he also sang Parsifal in Berlin. In 1999 he appeared as Lohengrin in St Petersburg as a guest with the Kirov Opera, sang Walther in Chicago and returned to Stockholm for Don Jose in Carmen. His last new role was Florestan in Fidelio, which he sang at the Vienna State Opera the night before he died. Winbergh was also nominated for several US Grammy awards during his career.

Winbergh suffered a heart-attack and died in Vienna in 2002, where he was performing at the time. To honour his memory and opera work The Gösta Winbergh Award (GWA) was instituted in Sweden after his death: the award is each year handed out to young aspiring tenors through an arranged singing contest that takes place at the opera stage Confidencen, at the Ulriksdal Royal Estate (a few miles outside Stockholm). The first prize consists of 14.000 euro and the second prize of 6.000 euro.

This article uses material from the article Gösta Winbergh from the free encyclopedia Wikipedia and it is licensed under the GNU Free Documentation License.