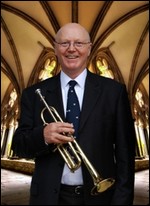 Crispian Steele-Perkins (born 18 December 1944) is an internationally acclaimed classical trumpeter who was educated at Copthorne Preparatory School, Marlborough College and the Guildhall School of Music.

Steele-Perkins lives in Dorking, Surrey and is the father of Emma, Kate and Guy. He is also grandfather to William and Ben Mitchell and Isabelle and Zoe Jinadu. In 1961, he married Angela Helen Hall (d. 1991), and in 1995 he married Jane Elizabeth Mary Steele-Perkins.

Steele-Perkins picked up his first trumpet at the age of ten and progressed so quickly that just 6 years later he was playing with the English National Youth Orchestra. On graduating from the Guildhall School of Music, Steele-Perkins began his professional career with the Sadler's Wells Theatre (ENO) 1966-73, before performing with the London Gabrielli Brass Ensemble 1974-84, Royal Philharmonic Orchestra 1976-80, English Baroque Soloists 1980-91, Amsterdam Baroque Orchestra, The King's Consort, 1985–2009, and Retrospect Ensemble, 2009–present. Steele-Perkins's purity of tone and artistic subtlety have received critical acclaim for more than four decades now. Throughout the 1980s and 1990s, he played a key role in the growth of historically-aware trumpet playing, using a collection of more than 100 pre-1900 mechanised and 'natural' trumpets to bring a brighter, clearer sound to baroque performances. In 2004, Steele-Perkins received the Monk Award[2] for his significant and lifelong contribution to the field of early brass music.

In addition to his work with classical orchestras and period instruments, Steele-Perkins has developed a body of television and film work which is universally recognisable today - most famously he played the theme tune to the popular British television programme Antiques Roadshow, the James Bond film For Your Eyes Only and The Lord of the Rings: The Two Towers.

Well known for his enthusiasm and wit, Steele-Perkins is also a popular presenter giving recitals, lectures and masterclasses at schools, colleges and music venues around the world. He also provides advice and guidance when called upon by today's up-and-coming trumpeting talent.

This article uses material from the article Crispian Steele-Perkins from the free encyclopedia Wikipedia and it is licensed under the GNU Free Documentation License.

Friedrich Kuhlau Finale aus dem Klavierquartett c-moll op. 32
Update Required To play the media you will need to either update your browser to a recent version or update your Flash plugin.