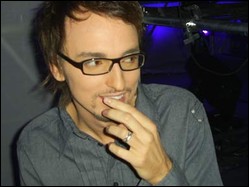 Christophe Durier better known as Christophe Willem (born on 3 August 1983 in Enghien-les-Bains, Val-d'Oise), is a French singer and the winner of the fourth edition of Nouvelle Star (French version of Pop Idol) in 2006.

Christophe spent most of his life in Deuil-la-Barre (Val-d'Oise), where his parents run a driving school. As a child, he learned figure skating and to play the piano. Later he learned to sing as part of a gospel choir "Young Voices". He also was composing songs at the age of fourteen.

Before deciding to study to become a lawyer and calculus professor, he continued to practice music and in 2004 he appeared in a Richard Anconina film, Alive, where he played the role of Henri, a young man with a golden voice who is, nevertheless, not considered suitable for the lead role in a musical. Since his film career continued after this, he returned home, where he studied communication while working a number of part-time jobs, such as babysitting and helping in a theatre.

Pushed by his family and friends, he decided to try out for the 2006 edition of Nouvelle Star. With an initial audition performance of Strong Enough by Des'ree, he surprised the judges, who did not expect such a quality voice from an admittedly ungainly-looking man. Nicknamed "La Tortue" (The Turtle) by Nouvelle Star judge Marianne James, he proved to be a popular contestant, and on 8 June, was crowned the fourth Nouvelle Star.

His debut album Inventaire was released on 16 April 2007, while the first single, Élu produit de l'année premiered in March.

In May 2007 he released the second single Double Je, which went directly on the #1 in France and Belgium.[1][2] The third single, Jacques A Dit came out in autumn 2007. The album was well received and sold double platinum in France[3] and gold in Belgium and Switzerland. So far, the album has sold over 1 million copies.[4][5] Willem started his first tour on 15 November 2007 and it ended on 20 July 2008. He toured France, Belgium, Switzerland and the Overseas departments and territories of France, such as Réunion, Mauritius and even New Caledonia. He also sang several times in Paris at L'Olympia and Zenith, which are the most prestigious concert halls in Paris.

In 2007 Christophe Willem appeared on the list of the 10 musicians who earn the most in France (including income, record sales, concerts and contract). Christophe Willem was in 6th place and earned a total of 1.22 million euros in 2007.[6]

He joined artists such as Tears for Fears, Lara Fabian, and Murray Head on the Night of the Proms tour 2007.

In 2008, he joined the Les Enfoires charity ensemble

His second album, Caféine, was published in 25 May 2009 and the album's first single was Berlin. The second single was Plus Que Tout and the third Heartbox.

Caféine went immediately to #1 in France.

In 2010, he joined the jury of French version of X Factor.

His third album, entitled Prismophonic was released a month and a day (21 November 2011) after the first single Cool (20 September 2011). The second single from the album is called Si Mes Larmes Tombent (January 2012)

This article uses material from the article Christophe Willem from the free encyclopedia Wikipedia and it is licensed under the GNU Free Documentation License.