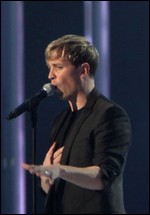 Kian John Francis Egan (born 29 April 1980) is an Irish musician, best known as a former member of boy band Westlife. He is a coach on The Voice of Ireland and won the thirteenth series of I'm a Celebrity...Get Me Out of Here! in 2013.

In his early musical years, he was part of a rock band and can play guitar, piano, and drums. Not only was he in Westlife, but Egan was also part of a pop group called IOYOU with fellow Westlife members Mark Feehily and Shane Filan, as well as Graham Keighron, Michael "Miggles" Garrett and Derrick Lacey. Egan, during a year long hiatus from Westlife in 2008, launched a new venture with Louis Walsh to put together and co-manage girlband, Wonderland. Their debut album reached number 6 on the Irish Albums Chart and number 8 on the UK Albums Chart, however, just four months later, they were dropped by Mercury Records.

It was announced in January 2014 that Egan had signed to Rhino Records of Warner Music Group and his debut album Home was released on 14 March in Ireland and 17 March in the UK, the song is 3:43 seconds long. His debut single "Home", a cover of the track by band Daughtry, had its first exclusive play on BBC Radio 2 on lunch time with Terry Wogan's show. The album has peaked to number 2 on the Irish Singles Chart and number 9 on the UK Albums Chart. In May 2014, Egan released "I'll Be" as the second single from the album, a cover of the track by Edwin McCain.

Egan is one of four coaches on The Voice of Ireland.[1] However, his dreams of winning the show went to tatters as he threw his lot in with Jim Devine, from Northern Ireland. This immediately put him at a disadvantage to the other contestants as, ahead of the final, viewers in Northern Ireland could not download his single, the tally of which contributed to his vote. Egan was left fuming and in need of support from Sharon Corr as he expressed his opinion on the unfairness of it all and had "huge rows" about it but to no avail.[2][3]

In June 2012, Egan announced in an interview with the Sunday Life that he was "looking at doing a TV show with Sky on surfing". Later reports suggested that the show would be eight episodes long and would broadcast on Sky1 later in the year.[4]

In July 2012, Egan presented This Morning's Hub on a regular basis, standing in for the regular hosts. Later that year, every Friday morning in October, he began giving reports on This Morning about the remaining contestants in the ninth series of The X Factor, before the competition's live shows that weekend.

On 21 October 2012, Egan co-presented the revamped version of Surprise Surprise, but did not return the following year.

Egan was born to Patricia and Kevin (d. 2009). He is the fifth of seven children. He attended Summerhill College secondary school in Sligo, where he met fellow band members Mark Feehily and Shane Filan. He is the cousin of Filan's wife, Gillian Walsh.[6]

Egan married English actress and Girl Thing and Wonderland member Jodi Albert on 8 May 2009. Due to illness, Egan's father was unable to attend the marriage ceremony after being diagnosed with a brain tumour, and died shortly after. On 31 July 2011, the couple announced they were expecting their first child.[7] Westlife's official Facebook page announced that Albert had given birth to a baby boy, Koa on 20 December 2011.[8] The family live in Strandhill, County Sligo.[9] On 15 November 2014, the pair announced they were expecting their second child in the spring. On 21 May 2015, Egan and his wife welcomed a second son, Zekey.[10] Their third son Cobi Egan was born 29. September 2017.

Egan spoke of the 2010 FIFA World Cup in South Africa but said he would not go after the Republic of Ireland national football team was eliminated from the tournament after Thierry Henry's handball.[11]

Egan has co-written some songs during his Westlife years and some unreleased ones:

This article uses material from the article Kian Egan from the free encyclopedia Wikipedia and it is licensed under the GNU Free Documentation License.