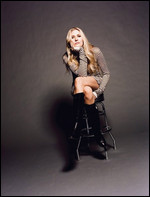 Williams graduated from Brentwood Academy and decided to pursue her passion of songwriting and continue playing guitar and piano. She bought her domain name, recorded an ep, started a website, and booked herself all over Nashville clubs. Soon after signing with CAA, she performed many shows throughout the US and usually toured alone with a guitar and keyboard driving her mother's suburban across the country. She went to the UK to open for songwriter Ron Sexsmith with a backpack full of ep's and a guitar. She began to build a loyal following overseas. After the release of her first EP in 2003, she signed with Universal South Records and toured with Billy Bob Thornton, Jewel, Train, Keith Urban, and Kasey Chambers among other artists. Universal South released her debut album, The Ones We Never Knew, in 2004.[1][2] This album garnered Williams much critical acclaim and she headlined shows in Germany, Switzerland, Sweden, Norway, Italy, Spain, Australia, Wales, Ireland, and the US.

In March 2006, Williams was injured in a near-fatal car crash with her sister and canceled her upcoming tour, this is when Holly had the idea to open a clothing boutique. Her sister was critically injured, endured over 29 surgeries and the family remained near her side. Holly's right arm and wrist were broken, she was unsure of when she would play again. She wrote "Without Jesus Here With Me" about her experience during the time of the car accident, it was released on her next record. Holly's sister, Hilary Williams, wrote a book called "Sign of Life" about her tragic experience. Holly made small musical appearances at this time, one of them joining John C. Reilly in Nashville, Tennessee to sing "Let's Duet" during the release of Walk Hard: The Dewey Cox Story on December 9, 2007.

After a long break Holly began playing guitar and writing songs again, she signed with Luke Lewis at Mercury Records. Williams' second studio album, Here with Me, was released in June 2009. To promote the album, Williams appeared on Late Night with Conan O'Brien, The Late Late Show with Craig Ferguson, Jimmy Kimmel Live!, Chelsea Lately and other television outlets. People magazine named Williams' 2009 album "one of the top ten albums of the year". Billboard said it was "one of the best singer/songwriter albums to come out of Nashville". USA Today said "there's purity and potency of her milk and whiskey kissed singing". She was married on September 27, 2009 to fellow musician Chris Coleman ( who co-wrote 3 of the songs off of "The Highway") and they settled in Nashville. She filmed a music video for "Alone" & "Three Days In Bed" in Paris, France.

Williams finished a six-week tour in Europe in early 2010, and continued the rest of the year headlining gigs and opening for other artists such as John Hiatt. After Bob Dylan called, Holly added her own music and lyrics to a half written Hank Williams Sr. lyric for a project entitled The Lost Notebooks of Hank Williams that he assembled, released in September 2011. Jack White, Norah Jones, Merle Haggard and Lucinda Williams were alongside Williams for this project.

Williams was also a part of Let Us In, a project produced by Phil Madeira which includes artists singing their favorite Paul McCartney songs in tribute to Linda McCartney. Williams performed "My Love" from the Wings era. Steve Earle and Buddy Miller are also included on the album, among others.

Williams was featured on the soundtrack for Flicka singing "Rodeo Road", written by Tom Douglas and Chuck Cannon. Tim McGraw (who starred in Flicka) named Williams, The Fray and Coldplay as his favorite artists in O, The Oprah Magazine saying "She has the ability to make you believe what she says, to make you feel vulnerable. She's intense and moody; she puts you in a time and place where you never would have imagined yourselfand then you're there." Mel Gibson met with Williams in Nashville and featured her on The Passion of The Christ soundtrack singing "How Can You Refuse Him Now", written by her grandfather.

Williams successful boutique H. Audrey is a high end women's boutique located in Nashville that carries designers such as Helmut Lang, Rag & Bone, and J Brand jeans. Her store has been featured in Vogue, Elle, Southern Living and Lucky magazine. Faith Hill, Sheryl Crow, Taylor Swift, Kelly Clarkson, Jessica Simpson, Patty Griffin and Robert Plant have been spotted here. The upstairs gallery at her store carries iconic music photographs from her favorite photographers including Henry Diltz, Pattie Boyd and Jim Marshall. She also has a lifestyle blog including many recipes at www.theafternoonoff.com.

Williams' third album, The Highway, co-produced by Williams and Charlie Peacock (The Civil Wars) was released on February 5, 2013. She wrote or co-wrote every song on the album, which is common for her recordings. This album includes Dierks Bentley, Jakob Dylan, Gwyneth Paltrow and Jackson Browne adding backing harmonies. The Highway was released to huge critical acclaim. American Songwriter magazine said "Williams has recorded her most accomplished, mature and world weary album. Even Hank Sr. would be proud." The New York Times stated "Williams is often closer to songwriters like John Prine or Bruce Springsteen, than the smiley Nashville mainstream." People Magazine said "it is sure to go down as one of the year's best country albums". A music video for "Drinkin'" aired on CMT networks.

This article uses material from the article Holly Williams from the free encyclopedia Wikipedia and it is licensed under the GNU Free Documentation License.