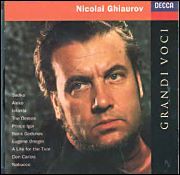 Nicolai Ghiaurov (or Nikolai Gjaurov, Nikolay Gyaurov, ) (September 13, 1929 – June 2, 2004) was a Bulgarian opera singer and one of the most famous basses of the postwar period. He was admired for his powerful, sumptuous voice, and was particularly associated with roles of Mussorgsky and Verdi. Ghiaurov married the Italian soprano Mirella Freni in 1978, and the two singers frequently performed together. They lived in Modena up until Ghiaurov's death in 2004 of a heart attack.

Ghiaurov was born in the small mountain town of Velingrad in southern Bulgaria. As a child, he learned to play the violin, piano and clarinet. He began his musical studies at the Bulgarian State Conservatory in 1949 under Prof. Hristo Brambarov. From 1950 until 1955, he studied at the Moscow Conservatory.

Ghiaurov's career was launched in 1955, when he won the Grand Prix at the International Vocal Competition in Paris and the First Prize and a gold medal at the Fifth World Youth Festival in Prague. Ghiaurov made his operatic debut in 1955 as Don Basilio in Rossini's The Barber of Seville in Sofia. He made his Italian operatic debut in 1957 in Teatro Comunale Bologna, before starting an international career with his rendition of Varlaam in the opera Boris Godunov at La Scala in 1959. 1962 marked Ghiaurov's Covent Garden debut as Padre Guardiano in Verdi's "Forza del Destino" as well as his first appearance in Salzburg in Verdi's "Requiem," conducted by Herbert von Karajan.

Ghiaurov first shared a stage with Mirella Freni in 1961 in Genoa. She was Marguerite, he was the devil in "Faust." Married in 1978, they lived in her hometown, Modena. They sang together frequently.

He made his US debut in Gounod's Faust in 1963 at the Lyric Opera of Chicago, and he went on to sing twelve roles with the company, including the title roles in Boris Godunov, Don Quichotte, and Mefistofele.

Ghiaurov made his Metropolitan Opera debut on 8 November 1965 as Mephistopheles. He sang a total of eighty-one performances in ten roles there, last appearing there on October 26, 1996, as Sparafucile in Rigoletto. During the course of his career, he also performed at Moscow's Bolshoi Theatre, the Vienna State Opera, Covent Garden, and Paris Opéra.

In the late 1970s Ghiaurov sang the title role in the first complete stereo recording of Jules Massenet's opera Don Quichotte (Don Quixote). He was recorded frequently, and his discography includes complete recording of many of his great stage roles, including Don Giovanni, Don Basilio, Ramfis, Colline, Banco, Gounod and Boito's Mephistos and Boris Godunov among many others.

"He commanded a remarkable vocal instrument, strikingly generous in size, warm in timbre, dark in color. He rolled out the resonant tone at his command with generosity, and with special ease at the burnished top." remarks Martin Bernheimer in Ghiaurov's obituary in Opera News.

Ghiaurov Peak on Livingston Island in the South Shetland Islands, Antarctica is named after Nicolai Ghiaurov.

This article uses material from the article Nicolai Ghiaurov from the free encyclopedia Wikipedia and it is licensed under the GNU Free Documentation License.

Tomaso Albinoni Concerto à cinque B-Dur op. 9/11 für Oboe, Streicher und Continuo
Update Required To play the media you will need to either update your browser to a recent version or update your Flash plugin.