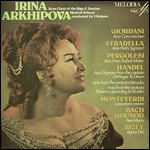 Irina Konstantinovna Arkhipova (Russian: ) (2 January 192511 February 2010) was a Russian mezzo-soprano, and later contralto, opera singer. She sang leading roles first in Russia at the Sverdlovsk Opera and the Bolshoi Theater, and then throughout Europe and in the United States.

Irina was born in Moscow.[1] Before switching to voice, she studied architecture at the Moscow Architectural Institute, graduating in 1948.[1] She then studied at the Moscow Conservatory. In 1954 she debuted in Sverdlovsk, and was made a member of the Bolshoi Theatre in 1956. She became a member of the CPSU in 1963 and was named a People's Artist of the USSR in 1966.[1]

Arkhipova was at the height of her career in the 1960s and 1970s, during which time she was an international star, interpreting both Russian and Italian repertoire. Her technique was irreproachable, and she had great expressive power. She has been compared with Christa Ludwig. One of her most celebrated roles is as Marfa in Khovanshchina by Modest Mussorgsky, as recorded with Boris Khaikin in 1972. At the age of 72, Arkhipova finally made a belated Met debut in March 1997 as Filippyevna in Eugene Onegin.

Arkhipova was entered into the Russian Book of Records as the most titled Russian singer. Minor planet number 4424 was named "Arkhipova," in 1995.

This article uses material from the article Irina Arkhipova from the free encyclopedia Wikipedia and it is licensed under the GNU Free Documentation License.