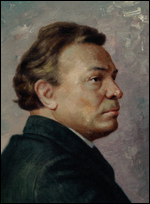 Ottorino Respighi (Italian: [ɔttoˈriːno resˈpiːɡi]; 9 July 1879 – 18 April 1936) was an Italian violinist, composer and musicologist, best known for his trilogy of orchestral tone poems: Fountains of Rome (1916), Pines of Rome (1924), and Roman Festivals (1928). His musicological interest in 16th-, 17th- and 18th-century music led him to compose pieces based on the music of these periods. He also wrote several operas, the most famous being La fiamma.

Ottorino Respighi was born on 9 July 1879 in an apartment inside Palazzo Fantuzzi on Via Guido Reni in Bologna, Italy, into a musical family.[1] His father, a local piano teacher, encouraged his son's musical inclinations and taught him basic piano and violin at an early age. Not long into his violin lessons, however, Respighi suddenly quit after his teacher whacked him on the hand with a ruler when he had played a passage incorrectly. He resumed lessons several weeks later with a more patient teacher.[2] His piano skills too, were a hit and miss affair, but his father arrived home one day surprised to find his son reciting Symphonic Studies by Robert Schumann on the family piano, revealing that he had learned it by himself in secret.[3]

Respighi studied the violin and viola with Federico Sarti at the Liceo Musicale in Bologna, composition with Giuseppe Martucci, and historical studies with Luigi Torchi, a scholar of early music. Respighi passed his exams and received a diploma in the violin, in 1899. By the time his studies had finished, he had acquired a large book collection, the majority of which were atlases and dictionaries due to his interest in languages.[4]

In 1900, Respighi accepted the role of principal violist in the orchestra of the Russian Imperial Theatre in Saint Petersburg, Russia during its season of Italian opera. He found great influence as an operatic composer during this time, and it was there when he met Russian composer Nikolai Rimsky-Korsakov, whose orchestrations he greatly admired.[5] Respighi studied orchestration with the composer for five months. Respighi returned to Bologna to continue his studies in composition, which earned him a second diploma. Until 1908, his principal activity was first violinist in the Mugellini Quintet, a touring quintet founded by composer Bruno Mugellini. Following his departure from the group, Respighi moved to Rome. He then spent some time performing in Germany before returning to Italy and turning his attention primarily to composition. Although many sources indicate he studied briefly with Max Bruch during his time in Germany, his wife later asserted that this was not the case.[6]

In 1909, Respighi's second opera Semirâma premiered, and was a considerable success. However, he fell asleep during the post-performance banquet from exhaustion of writing out the orchestral parts; his inconsistent sleeping patterns may have been caused by narcolepsy.[7]

In 1913, Respighi was appointed professor of composition at the Conservatorio di Santa Cecilia in Rome and held the post for the rest of his life. In 1917, his international fame rose following multiple performances of the first of his orchestral tone poems, Fountains of Rome. Subsequent tone poems include Pines of Rome (1924), the Trittico Botticelliano (Botticelli Triptych; 1927; in three movements, Primavera, Adoration of the Magi, and Birth of Venus, after the paintings by Botticelli), Vetrate di Chiesa (Church Windows; 1927), and the Impressioni Brasiliane (Brazilian Impressions; 1928). Other notable orchestral works include the Sinfonia Drammatica (1914), in three movements, and the Metamorphoseon Modi XII (variations on the twelve musical modes, 1930).

In 1919, he married the composer and singer Elsa Olivieri-Sangiacomo who, at fourteen years his junior,[8] had been his composition pupil. In 1921, the couple relocated to a flat in Rome.[9]

From 1923 to 1926, Respighi was the director of the Conservatorio di Santa Cecilia. In 1925, he collaborated with Sebastiano Arturo Luciani on an elementary textbook entitled Orpheus. He was elected to the Royal Academy of Italy in 1932.

In December 1925, Respighi arrived in New York City for his first performances in the United States. His first public performance was the solo part for the premiere of his piano concerto, Concerto in the Mixolydian Mode (1925), at Carnegie Hall on 31 December. The concert was a success.[10]

Respighi's masterpieces for smaller forces include the Sonata in B minor (1917) for Violin and Piano, which is frequently performed and recorded, and the Quartetto Dorico (1923), a string quartet written in the Doric mode.

Although Respighi was one of the leading members of the Generazione dell'Ottanta (Generation of the 1880s), along with Alfredo Casella, Gian Francesco Malipiero, and Ildebrando Pizzetti, who were known primarily as composers of instrumental and orchestral music, he frequently composed for vocal forces and completed nine operas whose composition spanned his entire career. Notable works for voice and piano include a series of art songs (Storia Breve (1904), Luce (1906), Nebbie (1906), Nevicata (1906) to texts by Ada Negri), Deità Silvane (1917; voice and orchestral version 1926), and three Cantatas setting texts by Percy Bysshe Shelley, Aretusa (1911), Il Tramonto (The Sunset) (1914), and La Sensitiva (1914). The Lauda per la Natività del Signore (1928–30) and Il Tramonto are performed relatively frequently.

Respighi's operas fall broadly into three groups – the dramatic-tragic operas Semirama (1910), Marie Victoire (1912–14), La Campana Sommersa (1923–27), Maria Egiziaca (1928), La Fiamma (1931–34), and Lucrezia (completed Elsa Respighi, 1936), and the lighter works, Re Enzo (1905), Belfagor (1919–22), La Bella Dormente nel Bosco (Sleeping Beauty, 1916/1933). Respighi's operas after Marie Victoire were all set to libretti by his close collaborator, Claudio Guastalla. Although La Fiamma is Respighi's most frequently performed opera, La Campana Sommersa and Maria Egiziaca are his operatic masterpieces, written when he was at the height of his creative powers, and both Respighi and his wife Elsa considered La Campana Sommersa to be his finest work.

Aside from pastiches and the re-imagined/arrangement, La Boutique Fantasque (1918, on themes by Rossini), Respighi completed only two ballets, the Ballata delle Gnomidi (Gnomes' Ball, 1920) and Belkis, Regina di Saba (Belkis, Queen of Sheba, 1932, also to a libretto by Guastalla).

A visit to Brazil resulted in the composition Impressioni Brasiliane (Brazilian Impressions). He had intended to write a sequence of five pieces, but by 1928 he had completed only three, and decided to present what he had. Its first performance was in 1928 in Rio de Janeiro. The first piece, "Tropical Night", is a nocturne with fragments of dance rhythms suggested by the sensuous textures. The second piece is a sinister picture of a snake research institute, Instituto Butantan, that Respighi visited in São Paulo, with hints of birdsong (as in Pines of Rome). The final movement is a vigorous and colorful Brazilian dance.

On the ship back home from Brazil, Respighi met by chance with Italian physicist Enrico Fermi. During their long conversation, Fermi tried to get Respighi to explain music in terms of physics, which Respighi was unable to do. They remained close friends until Respighi's death.[11]

In 1928, Respighi completed his third Roman tone poem, Roman Festivals, in nine days. The piece premiered in 1929 at Carnegie Hall in New York City with Arturo Toscanini conducting the New York Philharmonic Orchestra in 1929.[12] Toscanini recorded it twice for RCA Victor, first with the Philadelphia Orchestra in 1942 and then with the NBC Symphony Orchestra in 1949. Respighi's music had considerable success in the US; his Toccata for piano and orchestra was premiered, with Respighi as soloist, under Willem Mengelberg with the New York Philharmonic Orchestra at Carnegie Hall in November 1928, and his Metamorphoseon was a commission for the fiftieth anniversary of the Boston Symphony Orchestra.

Apolitical in nature, Respighi attempted to steer a neutral course once Benito Mussolini came to power in 1922. His established international fame allowed him some level of freedom, but at the same time encouraged the regime to exploit his music for political purposes. Respighi vouched for more outspoken critics such as Toscanini, allowing them to continue to work under the regime.[13]

Respighi was an enthusiastic scholar of Italian music of the 16th, 17th and 18th centuries. He published editions of the music of Claudio Monteverdi and Antonio Vivaldi, and of Benedetto Marcello's Didone. His work in this area influenced his later compositions and led to a number of works based on early music, notably his three suites of Ancient Airs and Dances and the Suite Gli uccelli (The Birds). In his Neoclassical works, Respighi generally kept clear of the musical idiom of the classical period, preferring to combine pre-classical melodic styles and musical forms (like dance suites) with typical late-19th-century romantic harmonies and textures.

He continued to compose and tour until January 1936, when his health deteriorated. He died of endocarditis on 18 April that year, at the age of 56. A year after his burial, his remains were moved to his birthplace, Bologna, and reinterred at the city's expense at the Certosa di Bologna. Inscribed on his tomb are his name and crosses; dates of birth and death are missing.

This article uses material from the article Ottorino Respighi from the free encyclopedia Wikipedia and it is licensed under the GNU Free Documentation License.

Gustav Holst Scherzo aus "A Moorside Suite"
Update Required To play the media you will need to either update your browser to a recent version or update your Flash plugin.