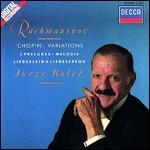 Jorge Bolet (November 15, 1914 – October 16, 1990) was a Cuban-born American virtuoso pianist and teacher. Amongst his teachers were Leopold Godowsky, and Moriz Rosenthal – the latter an outstanding pupil of Franz Liszt.[1]

Bolet was born in Havana and studied at the Curtis Institute of Music in Philadelphia, where he himself taught from 1939 to 1942. His teachers included Leopold Godowsky, Josef Hofmann, David Saperton, Moriz Rosenthal and Fritz Reiner.[2]

In 1937, he won the Naumburg Competition and gave his debut recital.[3] In 1942, Bolet joined the US Army. He was sent to Japan as part of the Army of Occupation. While there, he conducted the Japanese premiere of The Mikado.[2] He made his first recordings for the Boston label which published recital recordings in 1952. He excelled in Piano Concerto No. 2 Op. 16 of Sergei Prokofiev with the Cincinnati Symphony Orchestra recorded for Don Gabor's Remington label. He also performed the Four Scherzi of Frederic Chopin, also recorded by Remington. These recordings were made in the Fall of 1953.

Bolet provided the piano soundtrack for the 1960 biopic, Song Without End, which starred Dirk Bogarde as the legendary 19th-century piano virtuoso, Franz Liszt. (The film won the Academy Award for Best Music score.) However, Bolet's playing was condemned by American music critics for decades as being too focused on romantic virtuosity,[4] so his recordings in the 1960s were confined to fairly small and hard-to-find labels. Only in 1974 did he come to national prominence, with a stupendous recital in that year at Carnegie Hall, which sealed his reputation.[5]

From 1968 to 1977, Bolet was Professor of Music (piano) at Indiana University. In 1977 Bolet became Head of Piano at the Curtis Institute, succeeding Rudolf Serkin, but he resigned from this post to concentrate on his performing career. [6]

In 1984, the A&E Network broadcast a series of three programs, entitled Bolet Meets Rachmaninoff, in which the pianist was shown giving masterclasses on the subject of Rachmaninoff's Piano Concerto No. 3. These masterclasses were followed on the series by a complete performance of Bolet playing the concerto.

The Decca/London record company put him under contract in 1978, giving the 64-year-old Bolet his first systematic exposure to life at a major international label. Recordings of key sections of his repertoire were made from 1978 up to his death, but there are also tapes of many live concerts from this time, which were never commercially released but can be found in archives, principally the International Piano Archives at Maryland. Such performances include a specialty of his, Leopold Godowsky's "Concert Paraphrase on Themes from Johann Strauss's Die Fledermaus", which he studied with Godowsky during his student years.

Bolet's health began to decline in 1988 and, in 1989, he underwent a brain operation from which he never fully recovered. It was reported in the media that he died from heart failure in October 1990, at his home in Mountain View, California.[7] Gregor Benko states that Bolet died of complications from AIDS.[8]

Bolet is particularly well remembered for his performances and recordings of large-scale Romantic music, particularly works by Franz Liszt, César Franck, and Frédéric Chopin. He also specialised in piano transcriptions and unusual repertoire, including the fiendishly difficult works of Godowsky, many of which Bolet had studied with the composer himself. In an interview given to Elyse Mach (Great Contemporary Pianists Speak for Themselves, Dover Books on Music), Bolet extensively mentioned an obscure piece by Joseph Marx which was, according to Bolet's own words, his favorite among virtuoso concertos because of the enormous show of strength required from the soloist. His stage manner was one of full concentration to the performance, characterised by minimal body movement.

This article uses material from the article Jorge Bolet from the free encyclopedia Wikipedia and it is licensed under the GNU Free Documentation License.