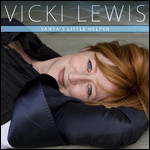 Vicki Lewis (born March 17, 1960) is an American film, stage, television and voice actress best known for her role as Beth in the NBC sitcom NewsRadio.

Lewis was born and raised in Cincinnati, Ohio, the daughter of Marlene, a nursing administrator, and Jim Lewis, an air traffic supervisor.[1] She has a sister, Denise. Lewis graduated from Anderson High School in Cincinnati in 1978. She studied musical theater at the University of Cincinnati College-Conservatory of Music. After receiving her diploma she moved to New York. She proceeded to work in various on and off Broadway shows.

Lewis was in a long-term relationship with Nick Nolte. The two met during the filming of I'll Do Anything. She is now married to sound engineer Philip G. Allen.[2]

On television, Lewis starred for 5 seasons on the NBC sitcom NewsRadio, followed by Three Sisters and the WB animated comedy Mission Hill. She made guest appearances on Seinfeld (in the episodes "The Secretary" and "The Race") and Murphy Brown. In a recurring role on Home Improvement, she played Maureen Binford, producer of the show-within-a-show Tool Time. Also in a recurring role, on How I Met Your Mother, she played Lily Aldrin's doctor, Dr. Sonya.

She appeared on Caroline in the City, The Norm Show, Grace Under Fire, Phenom and The 5 Mrs. Buchanans. Most recently, she made guest appearances on Surviving Suburbia, ABC's Grey's Anatomy, Disney Channel's Sonny with a Chance as Ms. Bitterman, the social worker on The Middle, and FX's Dirt.

Aside from Mission Hill, her voice acting career includes characters in Justice League Heroes, Rugrats Pre-School Daze, King of the Hill, Hercules: The Animated Series, An Extremely Goofy Movie, Finding Nemo, Phineas and Ferb, and Justice League: The New Frontier. Most recently, she voiced Eve in the 2010 film Alpha and Omega.

On stage, Lewis has appeared in City of Angels and My One and Only in Los Angeles, and has performed as a soloist with the New York Pops at Carnegie Hall. Her Broadway credits include Do Black Patent Leather Shoes Really Reflect Up?, Snoopy!!! The Musical, Damn Yankees, Chicago and The Crucible. She also appeared with Peter Gallagher and Patti LuPone in Pal Joey at the New York City Center. Lewis won the 2007 Ovation Award for Best Featured Actress in a Musical for the world premiere of Michael John LaChiusa's Hotel C'est L'amour.

Lewis's debut solo album East of Midnight was released in May 2010. The eclectic rock album has songs penned by Lewis as well as three cover songs. Lewis says this about the writing of the album: "The words and music of these songs unfolded before me like a foreboding window into a chapter of my life that would prove to be dauntingly destructive and spiritually bereft. Locked in my office in Malibu, California I wrote what would become a self-fulfilling prophecy - it would also prove to be the making of me."

This article uses material from the article Vicki Lewis from the free encyclopedia Wikipedia and it is licensed under the GNU Free Documentation License.

Hermann Schuncke 1.Satz aus der Sinfonie B-Dur op.6
Update Required To play the media you will need to either update your browser to a recent version or update your Flash plugin.