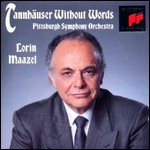 Lorin Varencove Maazel (March 6, 1930 – July 13, 2014) was an American conductor, violinist and composer. Making his debut at the conducting podium at the age of eight, he embarked on his career in earnest in 1953, establishing a reputation in European concert halls by 1960 but, by comparison, his career in the U.S. progressed far more slowly. However, he would later be appointed music director of the Cleveland Orchestra, Orchestre National de France, Pittsburgh Symphony Orchestra, Bavarian Radio Symphony Orchestra, and the New York Philharmonic, among other posts. Maazel was well-regarded in baton technique and possessed a photographic memory for scores. Described as mercurial and forbidding in rehearsal, he mellowed in old age.[1]

Maazel was born to Jewish American parents of Russian origin in Neuilly-sur-Seine, France, and brought up in the United States, primarily at his parents' home in the city of Pittsburgh's Oakland neighborhood.[2] His father, Lincoln Maazel (1903–2009),[3] was a singer, teacher of voice and piano, and an actor (he co-starred in George A. Romero's 1978 horror movie Martin); and his mother, Marion "Marie" Shulman Maazel (1894–1992),[4] founded the Pittsburgh Youth Symphony Orchestra.[5] His grandfather Isaac was a violinist in the Metropolitan Opera Orchestra for twenty years. Both Lincoln and Marie gave interviews for the Oral History Collection at the University of Pittsburgh, Lincoln's in 1994, and Marie's in 1974.[6]

Maazel was a child prodigy, taking his first conducting lesson at age seven with Vladimir Bakaleinikov and making his debut at age eight, conducting the University of Idaho Orchestra in Schubert's "Unfinished" Symphony in Los Angeles on July 13, 1938.[7] At the age of eleven, he guest-conducted the NBC Symphony Orchestra on the radio. At twelve he toured the United States of America to conduct major orchestras. He made his violin debut at the age of fifteen. He attended the Fanny Edel Falk Laboratory School[8] at the University of Pittsburgh as a child, followed by Peabody High School and the University of Pittsburgh.[9][10][11] Maazel studied briefly with Pierre Monteux in 1945.[12]

In the early 1950s, Maazel toured as the conductor with the Gershwin Concert Orchestra. The orchestra consisted of 25 members and a noted array of soloists. The orchestra was organized in cooperation with Ira Gershwin, to give the public a comprehensive Gershwin program. The list of soloists included George Gershwin's friend, Jesús María Sanromá, Carolyn Long and Theodor Uppman.[13]

In 1960, Maazel became the first American to conduct at the Bayreuth Festspielhaus. He was chief conductor of the Deutsche Oper Berlin from 1965 to 1971 and the Radio-Symphonie-Orchester (RSO) Berlin from 1964 to 1975.

In 1972, Maazel began his tenure as music director at the Cleveland Orchestra, succeeding George Szell. Maazel's emotional, rich interpretation of music greatly differed from Szell's characteristic crisp, defined precision in performance. A notable achievement during this time was the first complete recording of George Gershwin's Porgy and Bess, using an all-African American cast (except for the chorus). Maazel held the post until 1982. He never returned to the Cleveland Orchestra after his departure, although a scheduled engagement in 2006 did not occur because of illness.[14] In 1977, he became music director of the Orchestre National de France in Paris, a position he held until 1991.

From 1984 to 1988, Maazel was the music consultant to the Pittsburgh Symphony Orchestra, and its music director from 1988 to 1996. From 1993 until 2002, he was chief conductor of the Bavarian Radio Symphony Orchestra in Munich.

In 1989, expecting – but failing – to become successor to Herbert von Karajan as chief conductor of the Berlin Philharmonic, Maazel suddenly and publicly severed all connections with the orchestra when it was announced that Claudio Abbado was to take over. He claimed that his decision was because he was concerned for the orchestra's well-being.[15]

In 2000, Maazel made a guest-conducting appearance with the New York Philharmonic in two weeks of subscription concerts after an absence of over twenty years,[16] which met with positive reaction from the orchestra musicians.[17] This engagement led to his appointment in January 2001 as the orchestra's next music director, starting in 2002, succeeding Kurt Masur.[18][19] Maazel conducted the New York Philharmonic on their landmark visit to Pyongyang, North Korea on February 26, 2008. He led the orchestra in renditions of the North Korean and United States national anthems, Dvořák's New World Symphony, George Gershwin's An American in Paris, and closed with the traditional Korean folk song "Arirang". Maazel stepped down from the New York Philharmonic after the 2008/09 season.

In 2004, Maazel became the music director of the Arturo Toscanini Philharmonic. From September 2006 till March 2011, he was the musical director of the Orquestra de la Comunitat Valenciana, the house orchestra of the opera house Palau de les Arts, Valencia, Spain. His last concert there as Music Director took place on his 81st birthday on March 6, 2011, conducting his only opera 1984. In March 2010, Maazel was named chief conductor of the Munich Philharmonic, effective with the 2012/13 season.[20] Early in 2014, Maazel cancelled concert engagements as a result of ill health. Subsequently, in June 2014, he announced his resignation as music director of the Munich Philharmonic, effective immediately.[21]

Maazel conducted the music for three operatic films, Don Giovanni (1979), Carmen (1984) and Otello (1986). His own compositions included a poorly reviewed opera, 1984, based on the George Orwell novel Nineteen Eighty-Four.[22] He was depicted conducting Vienna's New Year concert on an Austrian postage stamp issued in 2005.[23] Maazel and his wife, Dietlinde Turban together operated a summer music festival called Castleton Festival at their Castleton, Virginia 600-acre (2.4 km2) estate, Castleton Farms.[24] Maazel arranged Wagner's Ring Cycle into a 70-minute suite, The 'Ring' Without Words, which he recorded in 1987 with the Berlin Philharmonic.

Maazel died on July 13, 2014, at his Castleton Farms estate in Virginia, from complications of pneumonia. He was survived by his daughters Anjali Maazel and Daria Maazel Steketee; son Ilann Maazel and daughter Fiona Maazel; his wife, Dietlinde Turban Maazel, their sons Orson and Leslie, and their daughter Tara, and four grandchildren, Kiran, Owen, Calypso, and Sahara.

Maazel was a Commander of the Légion d'honneur of the French Republic and of the Finnish Order of the Lion. He was decorated with the Bundesverdienstkreuz of the Federal Republic of Germany. On 27 May 2013, he received an honorary membership of the Vienna State Opera and the "Groszes Goldenes Verdienstkreuz" of Austria.

Maazel received the Italian Premio Abbiati and was an Honorary Life Member of the Israel Philharmonic. In addition, he was a Kentucky Colonel.[25]

This article uses material from the article Lorin Maazel from the free encyclopedia Wikipedia and it is licensed under the GNU Free Documentation License.