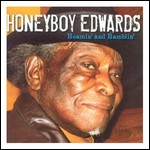 David "Honeyboy" Edwards (born June 28, 1915) is a Delta blues guitarist and singer from the American South. As of December 2009, Honeyboy Edwards, at age 95, and his close friend Pinetop Perkins (age 97) are the oldest Delta blues players still touring the United States. Edwards received a Grammy Lifetime Achievement Award on January 31, 2010, his second Grammy.

Edwards was born in Shaw, Mississippi.[1] He was a friend to the musician Robert Johnson and claims he was present on the fateful night Johnson drank the poisoned whiskey that took his life. Even though Johnson is usually credited with writing "Sweet Home Chicago," Edwards' website claims that it was he who wrote the song. Folklorist Alan Lomax recorded Edwards in Clarksdale, Mississippi in 1942 for the Library of Congress.[1] Edwards recorded a total of fifteen album sides of music.[1] The songs included "Wind Howlin' Blues" and "The Army Blues".[2] He did not record again commercially until 1951, when he recorded "Who May Your Regular Be" for Arc Records under the name of Mr Honey.[1] From 1974 to 1977, he recorded material for a full length LP, "I've Been Around", released in 1978 on the independent Trix Records label by producer/ethnomusicologist Peter B. Lowry.

Edwards is still touring the country performing, and is the author of one book, The World Don't Owe Me Nothin', published in 1997 by Chicago Review Press. The book recounts his life from childhood, his journeys through the South and his arrival in Chicago in the early 1950s. A companion CD by the same title was released by Earwig Records shortly afterwards. He has also recorded at a church-turned-studio in Salina, Kansas and released albums on the APO record label. Edwards claims to have written several well-known blues songs including "Long Tall Woman Blues" and "Just Like Jesse James".[1] His discography for the 1950s and 1960s amounts to nine songs from seven sessions.[2]

Edwards is one of the last original delta blues guitarists still performing. In October 2004, the last four original delta blues musicians gathered together in Dallas for a once-in-a-lifetime concert. The line-up consisted of: Honeyboy Edwards, Pinetop Perkins, Henry Townsend, and Robert Lockwood, Jr. But two years later in 2006, Townsend died (aged 96) and Lockwood died (aged 91). Perkins still continues to tour, mainly in the US.

Edwards also still tours, performing up to 100 concerts a year. He undertook a tour of Europe in September and October 2009, and frequently tours in Canada.

In the 1991 documentary The Search for Robert Johnson, Edwards recounts stories about Johnson, including his murder.

Edwards was featured in the 2001 documentary film, Honeyboy.

His albums White Windows, The World Don't Owe Me Nothin', Mississippi Delta Blues Man, and a recent album in which he appears with Robert Lockwood, Jr., Henry Townsend and Pinetop Perkins, Last Of The Great Mississippi Delta Bluesmen: Live In Dallas,[3] were all nominated for the W. C. Handy Award. The latter album also won a Grammy Award in 2008.

This article uses material from the article David Honeyboy Edwards from the free encyclopedia Wikipedia and it is licensed under the GNU Free Documentation License.

Carl Maria von Weber Concertino für Klarinette und Orchester Es-Dur op. 26
Update Required To play the media you will need to either update your browser to a recent version or update your Flash plugin.