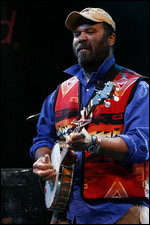 Otis Taylor (born July 30, 1948,[1][2] Chicago, Illinois, United States) is an American blues musician. He is a multi-instrumentalist whose talents include the guitar, banjo, mandolin, harmonica, and vocals. In 2001, he was awarded a fellowship to the Sundance Film Composers Laboratory.

Taylor was born in Chicago and moved at a young age to Denver, Colorado where he grew up. He originally grew up playing the banjo, but his father wanted him to be a jazz musician. Upon hearing that the banjo was originally an African instrument turned almost exclusively into a white bluegrass instrument in part through the derogatory black-face minstrel shows of the 19th century, Taylor dropped the banjo and began to focus solely on the guitar and harmonica. He played music professionally both in Europe and the United States in a variety of blues-oriented bands until 1977, when he left the music industry for other pursuits, including becoming an antique dealer.

Taylor returned to music in 1995, and as of 2008, has released nine blues albums on several record labels. His music tends to focus on the hard realities of life, especially relating to the black community. Some common themes in his music are murder, racism, poverty, and the need for redemption. To date, Taylor has eleven Blues Music Awards nominations while White African was named 'Best Artist Debut'.

Down Beat magazine critics' Poll named Taylor's Truth is Not Fiction as Blues CD of the Year for 2002.

Taylor was the support act on Gary Moore's 2007/8/9 European tours and played on his last album.

In May 2009, Taylor won a Blues Music Award for his banjo playing. He held the first Trance Blues Festival in Boulder, Colorado in November 2010.

Taylor married Carol Ellen Bjork in 1985. They have two daughters, Cassie Taylor and Jae Taylor. Taylor's eldest daughter, Cassie, is featured on many of his releases. She also plays several instruments including bass and vocals.

This article uses material from the article Otis Taylor (musician) from the free encyclopedia Wikipedia and it is licensed under the GNU Free Documentation License.