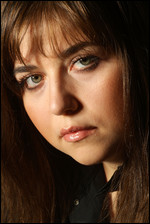 Auerbach was born in Chelyabinsk, a city in the Urals bordering Siberia. She holds degrees in piano and composition from The Juilliard School, where she studied piano with Joseph Kalichstein and composition with Milton Babbitt. She also graduated from the piano soloist program of the Hochschule für Musik Hannover.[1]

A new commission by The Royal Danish Ballet, to celebrate Hans Christian Andersen's bicentenary, was Lera Auerbach's second collaboration with choreographer John Neumeier. The ballet is a modern rendition of the classic fairy tale The Little Mermaid and was premiered in April 2005 at the then newly-opened Copenhagen Opera House.[2]

Her Double Concerto for Violin, Piano, and Orchestra, Op. 40, was written in 1997, but not premiered until December 15, 2006, in Stuttgart by the Stuttgart Radio Symphony Orchestra conducted by Andrey Boreyko; the soloists were violinist Vadim Gluzman and pianist Angela Yoffe. The American premiere was on February 13, 2010, by the Fort Wayne Philharmonic Orchestra conducted by Andrew Constantine; the soloists were violinist Jennifer Koh and pianist Benjamin Hochman.[3]

Auerbach made her Carnegie Hall debut in May 2002, performing her own Suite for Violin, Piano and Orchestra with Gidon Kremer and the Kremerata Baltica.[4]

In 2007, her Symphony No. 1 "Chimera" received its world premiere by the Düsseldorf Symphony. Other 2007 premieres included Symphony No. 2 "Requiem for a Poet" by Hannover's NDR Radio Philharmonic, as well as A Russian Requiem (on Russian Orthodox sacred texts and poetry by Alexander Pushkin, Gavrila Derzhavin, Mikhail Lermontov, Boris Pasternak, Osip Mandelstam, Alexander Blok, Zinaida Gippius, Anna Akhmatova, Joseph Brodsky, Viktor Sosnora and Irina Ratushinskaya) by the Bremen Philharmonic with the Latvian National Choir and the Estonian Opera Boys Choir.

Auerbach's a cappella opera The Blind (based on a play by Maurice Maeterlinck) was recently performed in a controversial new production by John La Bouchardiere at Lincoln Center for Performing Arts, New York in July 2013, throughout which the entire audience was blindfolded.[6]

In 2005 Auerbach received the Paul Hindemith Prize from the Schleswig-Holstein Musik Festival.[7] In the same year she received the Förderpreis Deutschlandfunk and the Bremer Musikfest Prize; she was composer-in-residence in Bremen. And she is notable for being the youngest composer to be represented by the acclaimed music publisher, Internationale Musikverlage Hans Sikorski GmbH & Co. KG of Hamburg, Germany.[8]

In 2007, she was selected as a member of the forum of Young Global Leaders by the World Economic Forum in Davos, Switzerland.[9]

This article uses material from the article Lera Auerbach from the free encyclopedia Wikipedia and it is licensed under the GNU Free Documentation License.