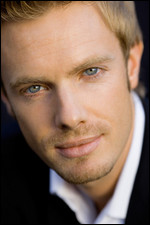 He began piano lessons at age five in Los Angeles and made his solo orchestral debut at age ten. At age 16, he made his debut with Esa-Pekka Salonen and the Los Angeles Philharmonic. In 1998, after graduating from high school at Crossroads School for Arts and Sciences in Santa Monica, California, he moved to New York City to study at the Juilliard School and Columbia University.

On July 4, 2009, von Oeyen performed at the U.S. Capitol with the National Symphony Orchestra in "A Capitol Fourth," reaching millions worldwide in the PBS live telecast.

This article uses material from the article Andrew von Oeyen from the free encyclopedia Wikipedia and it is licensed under the GNU Free Documentation License.

Charles Gounod Walzer aus der Oper Faust
Update Required To play the media you will need to either update your browser to a recent version or update your Flash plugin.