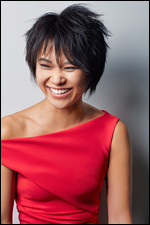 Yuja Wang (Chinese: 王羽佳; pinyin: Wáng Yǔjiā;[1] born February 10, 1987)[2] is a Chinese classical pianist. She was born in Beijing, began studying piano there at age six, and went on to study at the Central Conservatory of Music in Beijing and the Curtis Institute of Music in Philadelphia.[3] By the age of 21 she was already an internationally recognized concert pianist, giving recitals around the world.[4] She has a recording contract with Deutsche Grammophon. In an interview with the LA Times, she said “For me, playing music is about transporting to another way of life, another way of being. An actress does that.”[5]

Wang comes from an artistic family. Her mother, Zhai Jieming, is a dancer and her father, Wang Jianguo, is a percussionist. Both live in Beijing.[6]

At age 15, Wang entered the Curtis Institute of Music in Philadelphia, where she studied for five years with Gary Graffman and graduated in 2008. Graffman said that Wang's technique impressed him during her audition, but "it was the intelligence and good taste" of her interpretations that distinguished her.[6]

In 1998, Wang won third prize in the Ettlingen International Competition for Young Pianists in Ettlingen, Germany.[8] In 2001, she won third prize and the special jury prize (awarded to an especially superior finalist of less than 20 years in age, prize money of 500,000 Japanese Yen) in the piano section at the first Sendai International Music Competition in Sendai, Japan.[9]

In 2003, Wang made her European debut with the Tonhalle Orchester Zürich, Switzerland, playing Beethoven's Piano Concerto No. 4 under the baton of David Zinman. She made her North American debut in Ottawa in the 2005/06 season, replacing Radu Lupu performing that Beethoven concerto with Pinchas Zukerman conducting.[11]

On September 11, 2005, Wang was named a 2006 biennial Gilmore Young Artist Award winner, given to the most promising pianists age 22 and younger. As part of the award, she received $15,000, appeared at Gilmore Festival concerts, and had a new piano work commissioned for her.[12]

In 2006, Wang made her New York Philharmonic debut at the Bravo! Vail Music Festival. The following season, she performed with the orchestra under Lorin Maazel during the Philharmonic's tour of Japan and Korea.[13]

In March 2007, Wang's breakthrough came when she replaced Martha Argerich in concerts held in Boston.[14][15][16] Argerich had cancelled her appearances with the Boston Symphony Orchestra on four subscription concerts from March 8 to 13.[14] Wang performed Tchaikovsky's Piano Concerto No. 1 with Charles Dutoit conducting.

In 2008, Wang toured the U.S. with the Academy of St Martin in the Fields led by Sir Neville Marriner. In 2009, she performed as a soloist with the YouTube Symphony Orchestra, led by Michael Tilson Thomas at Carnegie Hall. Wang performed with the Lucerne Festival Orchestra conducted by Claudio Abbado in Beijing, the Royal Philharmonic Orchestra in Spain and in London, and the Hong Kong Philharmonic Orchestra.[13]

In 2009, Wang performed and recorded Mendelssohn's Piano Concerto in G Minor with Kurt Masur at the Verbier Festival.[17] Her performance of Rimsky-Korsakov's "Flight of the Bumblebee" is featured on the Verbier Festival highlights DVD from 2008. Wang's "Bumblebee" video has been viewed more than 4.5 million times on YouTube.[18]

In 2012, Wang toured with the Israel Philharmonic Orchestra and conductor Zubin Mehta in Israel and the U.S., with a performance at Carnegie Hall in New York in September.[19]

Wang toured Asia in November 2012 with the San Francisco Symphony and its conductor Michael Tilson Thomas.[20]

In February 2013, Wang performed and recorded Prokofiev's Concerto No. 2 and Rachmaninoff's Concerto No. 3 with Conductor Gustavo Dudamel and the Venezuelan Orquesta Sinfónica Simón Bolívar.[21] Also in 2013, Wang's recital tour of Japan culminated with her recital debut at Tokyo's Suntory Hall.[22]

Wang made her Berlin Philharmonic debut in May 2015, performing Sergei Prokofiev's 2nd Piano Concerto with Conductor Paavo Järvi. The performance was broadcast live through the orchestra's Digital Concert Hall.[23]

In a departure from her previously predominantly Russian repertoire, she played Mozart's Piano Concerto No. 9, the Jeunehomme, in February 2016 at David Geffen Hall in New York on four successive nights with Charles Dutoit conducting, then, in her debut with the Vienna Philharmonic under Valery Gergiev in Munich and Paris.[24] In March 2016, Wang played for three nights in Messiaen's Turangalîla-Symphonie with Esa-Pekka Salonen conducting. In a recital at Carnegie hall in May 2016, she played Beethoven's Piano Sonata No. 29, the Hammerklavier, and two Brahms Ballades and Robert Schumann's Kreisleriana.[24]

Wang accompanied the National Youth Orchestra of China for its Carnegie Hall premiere on July 22, 2017, with conductor Ludovic Morlot of the Seattle Symphony, performing Tchaikovsky's Piano Concerto No. 1 in B-Flat Minor.[25]

In addition, EuroArts released a DVD on which she performs Sergei Prokofiev's Piano Concerto No. 3 in C Major, with Abbado conducting.[29]

Yuja Wang performed the Piano Concerto No. 2 with the Simon Bolivar Symphony Orchestra under Gustavo Dudamel in Caracas, Venezuela, in February 2013. A recording of this performance was released in December 2013 on Deutsche Grammophon.

Although there are reports Wang released a debut CD in 1995,[30][31][32] there is little information available about it.

Wang has received attention as much for her eye-catching outfits and glamorous stage presence as for her piano playing. In a much-quoted 2011 review of a concert at the Hollywood Bowl, Los Angeles Times classical music critic Mark Swed wrote:

But it was Yuja Wang's orange dress for which Tuesday night is likely to remembered ... Her dress Tuesday was so short and tight that had there been any less of it, the Bowl might have been forced to restrict admission to any music lover under 18 not accompanied by an adult. Had her heels been any higher, walking, to say nothing of her sensitive pedaling, would have been unfeasible.[33]

Swed was widely criticised for this aspect of his review.[34]

In a review of Wang's 2011 Carnegie Hall debut, The New York Times wrote:

From the opening piece, an early Scriabin prelude, Ms. Wang played this Chopinesque music, all rippling left-hand figures and dreamy melodic lines, with a delicacy, poetic grace and attention to inner musical details that commanded respect. After intermission she offered a rhapsodic, uncommonly nuanced account of the formidable Liszt Sonata in B minor. But the most revealing performance came in Prokofiev's Piano Sonata No. 6 in A. Completed in 1940, this nearly 30-minute work channels some barbaric, propulsive, harmonically brittle outbursts into a formal four-movement sonata structure. In most readings, intriguing tension results from hearing music of such aggressive modernism reined in by Neo-Classical constraints. Ms. Wang reconciled these conflicting elements through a performance of impressive clarity and detail.[35]

In June 2012, the San Francisco Chronicle wrote that Wang is "quite simply, the most dazzlingly, uncannily gifted pianist in the concert world today, and there's nothing left to do but sit back, listen and marvel at her artistry."[36]

From a May 2013 Carnegie Hall concert, The New York Times reported that Wang's "fortissimos were fearsome, but so, in a quieter way, were the longing melodic lines of the first movement of Rachmaninoff's Sonata No. 2." The reviewer added:

The liquidity of her phrasing in the second movement of Scriabin's Sonata No. 2 eerily evoked the sound of woodwinds. In that composer's Sonata No. 6 she juxtaposed colors granitic and gauzy to eerily brilliant effect before closing the written program with a rabid rendition of the one-piano version of "La valse", accentuating the sickliness of Ravel's distorted waltzes.[37]

In May 2016, The New York Times reviewed her performance of Beethoven's Hammerklavier Sonata:

Ms. Wang's virtuosity goes well beyond uncanny facility. Right through this Beethoven performance she wondrously brought out intricate details, inner voices and harmonic colorings. The first movement had élan and daring. The scherzo skipped along with mischievousness and rhythmic bite. In the grave, great slow movement, she played with restraint and poignancy. She kept you on edge during the elusive transition to the gnarly, dense fugue, which she then dispatched with unfathomable dexterity. This was not a probing or profound Hammerklavier. But I admired Ms. Wang's combination of youthful energy and musical integrity.[38]

This article uses material from the article Yuja Wang from the free encyclopedia Wikipedia and it is licensed under the GNU Free Documentation License.

Felix Draeseke Serenade für Orchester D-Dur op.49
Update Required To play the media you will need to either update your browser to a recent version or update your Flash plugin.