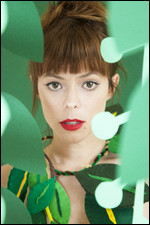 Lenka (born Lenka Kripac; 19 March 1978) is an Australian singer and actress best known for her song "The Show", from her self-titled album Lenka. The track was used in the 2011 film Moneyball. Her song "Everything at Once" was used in a Windows 8 television advertisement and in a Disney Movie Rewards commercial.[4]

The daughter of Czech-born jazz trumpet musician Jiri Kripac[5] and Australian schoolteacher Eden, Lenka was raised in the Australian coastal town of Bega until age seven, when her family moved to Sydney, where she received her schooling, acting and music training, and started to work as a highly regarded theatre actress and later musician.[6]

As a teenager, Lenka studied acting at the Australian Theatre For Young People,[7] where she trained with actress Cate Blanchett.[8] Lenka starred in the Australian ABC-TV drama series GP as Vesna Kapek in the 1990s. She also hosted Cheez TV and has guest starred in other Australian TV series, including Home and Away, Wild Side, Head Start, and Spellbinder. She appeared in Australian feature films The Dish and Lost Things, as well as in theatre productions.[8] Lenka provided the vocals for 2 tracks on Paul Mac's 2005 album Panic Room. As Lenka Kripac, she was a member of the Australian electronic-rock crossover band Decoder Ring for two of their albums. She then moved to California in 2007.[6]

After adopting her first name as her sole artistic name, Lenka released her eponymous debut album on 24 September 2008, with "The Show" (produced by Stuart Brawley) chosen to be the first single release from the set.[9] The album peaked at number 142 on the US Billboard 200. Her song "Everything at Once" was featured in a Windows 8 ad, becoming a worldwide success.[10] Lenka creates paper art type stop-motion animated music videos for each of her singles with her husband James Gulliver Hancock, a visual artist from Australia, for a deliberately childlike effect.[5] Her vocal stylings are a juxtaposition of pop and layered, complicated influences. She provided vocals on two tracks ("Addicted" and "Sunrise") on German artist Schiller's album Atemlos, released in Germany on 12 March 2010.

Lenka currently resides between Sydney, Australia and Brooklyn, New York. Lenka is married to visual artist James Gulliver Hancock.[11] She announced on 27 September 2011 that she was pregnant.[12] In March 2012, she announced on Twitter that she had given birth to a boy named Quinn.[13][14]

This article uses material from the article Lenka from the free encyclopedia Wikipedia and it is licensed under the GNU Free Documentation License.