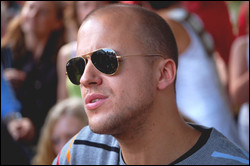 Milow was first heard on the 2004 Humo's Rock Rally competition. His performance was awarded with a position in the finals but just out of reach of a top three position.

In 2006, Milow produced his first album The Bigger Picture together with Nigel Powell (from the British group Unbelievable Truth). The first single from the album, "One Of It", was played frequently on the radio station Studio Brussel. The second single "You Don't Know" reached #3 in the Ultratop 50.[1]

Flemish newspaper De Standaard offered Milow a column in their online edition. Milow still writes in this blog titled Off the Record about his songs and events in his life. On 28 June 2007, Milow was the opening act on Rock Werchter.

In September 2008 Milow released a cover version of "Ayo Technology", a song originally written and recorded by 50 Cent, Justin Timberlake and Timbaland. The sexually charged, tongue-in-cheek video for "Ayo Technology" has proved a huge sensation online where it has received over 45 million plays on YouTube alone. The single reached #1 in Belgium, the Netherlands, Sweden, Switzerland and Denmark, as well as a #1 position on the Spotify Top List.[2] More than 300,000 copies were sold in Germany alone,[3] worldwide more than 600,000 copies. Milow sold also over 400,000 copies of his album Milow.[4]

Milow spent a year as an exchange student in California, USA with the AFS Intercultural Programs.

Milow set a world record[5][6] by performing in front of 50 mine workers at the bottom of the Pyhäsalmi Mine, 1,430 meters below sea level.

Milow recorded a duet with Norwegian singer/songwriter Marit Larsen entitled "Out of My Hands". The song was originally contained in Milows album Coming of Age released in 2008 in Belgium. The duet version featuring Marit was released on 12 February 2010 via Milows Myspace page and Marit's YouTube page.

In his live performances, Milow is surrounded by musicians and singers.

This article uses material from the article Milow (singer) from the free encyclopedia Wikipedia and it is licensed under the GNU Free Documentation License.