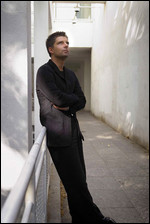 Matthias Pintscher (born 29 January 1971) is a German composer and conductor. As a youth, he studied the violin and conducting.[1]

Pintscher was born in Marl, North Rhine-Westphalia. He began his music studies with Giselher Klebe in 1988 at the Hochschule für Musik Detmold, in Detmold. In 1990 he met Hans Werner Henze and in 1991 and 1992 he was invited to Henze's summer school in Montepulciano, Italy. He later studied with German composer and flutist Manfred Trojahn He held a Daniel R Lewis Young Composer Fellowship with the Cleveland Orchestra from 2000 to 2002.[1]

In October 2010 Pintscher became the first Artist-in-Association with the BBC Scottish Symphony Orchestra. In June 2012, the Ensemble InterContemporain announced the appointment of Pintscher as its next Music Director, beginning in the 2013-14 season, with an initial contract of three years.[2]

Several of his orchestral and vocal works have been performed at such venues as Carnegie Hall and the Royal Albert Hall.

His 2012 double trumpet concerto "Chute d'Étoiles - Hommage à Anselm Kiefer" was inspired by the work of Igor Stravinsky. It was first performed by the Cleveland Orchestra at Lucerne Festival in 2012. The US premiere was at Carnegie Hall, also with the Cleveland Orchestra. The UK premier was performed at Glasgow City Halls by the BBC Scottish Symphony Orchestra on 16 May 2013.

Pintscher has lived in New York City since 2008.

This article uses material from the article Matthias Pintscher from the free encyclopedia Wikipedia and it is licensed under the GNU Free Documentation License.