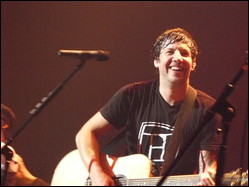 Pierre Charles Bouvier (9 May 1979)[1] is a French-Canadian musician and composer who is best known as the lead singer for pop punk band Simple Plan.

At the age of 13, he founded the punk rock band Reset with his best friend Chuck Comeau in which he was the bassist and lead vocalist. He wasn't feeling happy with Reset and left the band in 1999, a year after Comeau. His current bandmate David Desrosiers took his place as lead vocalist/bassist. He then reacquainted with Comeau at a Sugar Ray concert and joined him in creating Simple Plan with old schoolmates Jeff Stinco and Sébastien Lefebvre. Desrosiers also left Reset and joined the new band.

Bouvier is co-owner of Role Model Clothing, along with Comeau and Patrick Langlois.

Bouvier grew up in Montreal along with other members of Simple Plan. He has two brothers, Jay and Jonathan, and his parents are Real and Louise Bouvier. He often refers to his father as "his hero".

During early Simple Plan years, he was dating Wave Gagnon, an American model. The couple split on good terms due to differences.

In 2013, Bouvier married his long term girlfriend Lachelle Farrar; he has two daughters, one, Lennon Rose, born in 2011, who is named after The Beatles star John Lennon.

This article uses material from the article Pierre Bouvier from the free encyclopedia Wikipedia and it is licensed under the GNU Free Documentation License.