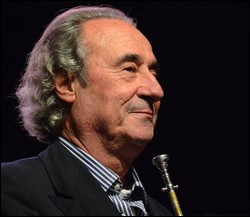 Franco Ambrosetti (born 10 December 1941) is a Swiss jazz trumpeter, flugelhornist and composer born in Lugano, Switzerland,[1] perhaps most noteworthy for his many albums released on the jazz recording label Enja Records. Ambrosetti's father, Flavio, was a saxophonist who once played sax opposite Charlie Parker. Franco worked professionally with his father frequently in a group which also included George Gruntz, among others.[2]

This article uses material from the article Franco Ambrosetti from the free encyclopedia Wikipedia and it is licensed under the GNU Free Documentation License.