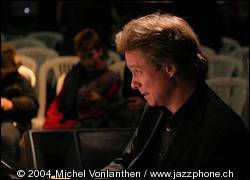 After graduating from Oberlin Conservatory Watson moved to Paris. In 1982 he completed his first trio recording with Paul Motian and Ed Schuller (Conspiracy) followed by two solo albums. Watson has been married twice, no children. He worked in a long-time duo with doublebass player John Lindberg which became extended with Albert Mangelsdorff and Ed Thigpen.[1] Watson also worked with Steve Lacy,[2] with Linda Sharrock and with Joëlle Léandre (Palimpseste, 1991). His Trio with Mark Dresser and Ed Thigpen (Silent Hearts, 1998) was the basis for the "Full Metal Quartets" (1999/2000) with saxophone player Bennie Wallace.

This article uses material from the article Eric Watson (musician) from the free encyclopedia Wikipedia and it is licensed under the GNU Free Documentation License.