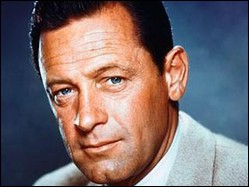 William Holden (April 17, 1918 – November 12, 1981) was an American actor. One of the most popular movie stars of all time, Holden was one of the biggest box office draws of the 1950s. Holden won the Academy Award for Best Actor in 1953 for his role in Stalag 17, and a Primetime Emmy Award for Outstanding Lead Actor for his role in the 1973 television film The Blue Knight.

Holden starred in some of the most popular and critically acclaimed films of all time, including such blockbusters as Sunset Boulevard, The Bridge on the River Kwai, The Wild Bunch, Picnic, The Towering Inferno, and Network. He was named one of the "Top 10 Stars of the Year" six times (1954-1958, 1961), and appeared on the American Film Institute's AFI's 100 Years100 Stars list as number 25.

Holden was born William Franklin Beedle, Jr. in O'Fallon, Illinois, the son of Mary Blanche (née Ball), a schoolteacher, and William Franklin Beedle, Sr., an industrial chemist.[2] He had two younger brothers, Robert and Richard. Holden's paternal great-grandmother, Rebecca Westfield, was born in England in 1817, while some of his mother's ancestors settled in Virginia's Lancaster County after emigrating from England in the 17th century.[2] His younger brother, Robert W. "Bobbie" Beedle, later became a U.S. Navy fighter pilot who was killed in action in World War II, over New Ireland, on January 5, 1944.

His family moved to South Pasadena when he was three. After graduating from South Pasadena High School, Holden attended Pasadena Junior College, where he became involved in local radio plays. Contrary to legend and theatre publicity, he did not study at the Pasadena Playhouse, nor was he discovered in a play there. Rather, he was spotted by a talent scout from Paramount Pictures in 1937 while playing the part of an 80-year-old man, Marie Curie's father-in-law, in a play at the Playbox, a separate and private theatre owned by Pasadena Playhouse director Gilmor Brown. His first film role was in Prison Farm the following year.

Holden's first starring role was in Golden Boy (1939), in which he played a violinist-turned-boxer. That was followed by the role of George Gibbs in the film adaptation of Our Town.[3]

After Columbia Pictures picked up half of his contract, he alternated between starring in several minor pictures for Paramount and Columbia before serving as a 2nd lieutenant in the United States Army Air Forces during World War II, where he acted in training films for the First Motion Picture Unit. Beginning in 1950, his career took off when Billy Wilder tapped him to star as the down-at-the-heels screenwriter Joe Gillis, who is taken in by faded silent-screen star Norma Desmond (Gloria Swanson) in Sunset Boulevard, for which Holden earned his first Best Actor Oscar nomination.[4]

Following this breakthrough film, his career quickly grew in stature as he played a series of roles that combined good looks with cynical detachment, including a prisoner-of-war entrepreneur in Stalag 17 (1953), for which he won the Academy Award for Best Actor, a pressured young engineer/family man in Executive Suite (1954), an acerbic stage director in The Country Girl (1954), a conflicted jet pilot in the Korean War film The Bridges at Toko-Ri (1954), a carefree playboy in Sabrina (1954), a wandering college football star in Picnic (1955), a dashing war correspondent in Love Is a Many-Splendored Thing (1955), his most widely recognized role as an ill-fated prisoner in The Bridge on the River Kwai (1957), a World War II tug boat captain in The Key (1958), and an American Civil War military surgeon in The Horse Soldiers (1959), which also starred John Wayne.

He also played a number of sunnier roles in light comedy, such as the handsome architect pursuing virginal Maggie McNamara in the controversial Production Code-breaking The Moon Is Blue (1953), as Judy Holliday's tutor in Born Yesterday (1950), as a playwright captivated by Ginger Rogers' character in Forever Female (1953) and as Humphrey Bogart's younger brother, a playboy, in Sabrina (1954), which also starred Audrey Hepburn. In 1954, Holden was featured on the cover of Life.

On February 7, 1955, he appeared as a guest star on I Love Lucy as himself. His career peaked in 1957 with the enormous success of The Bridge on the River Kwai, but Holden spent the next several years starring in a number of films that rarely succeeded commercially or critically.[5] By the mid-1960s, the quality of his roles and films had noticeably diminished.

In 1969, Holden made a comeback when he starred in director Sam Peckinpah's graphically violent Western The Wild Bunch, winning much acclaim. Also in 1969, Holden starred in director Terence Young's family film L'Arbre de Noël, co-starring Italian actress Virna Lisi, based on the novel of the same name by Michel Bataille. This film was originally released in the United States as The Christmas Tree and on home video as When Wolves Cry.[6]

Five years later, he starred with Paul Newman and Steve McQueen in the critically acclaimed disaster film The Towering Inferno, which became a box office smash and one of the highest grossing films of Holden's career. He was also praised for his Oscar-nominated leading performance in Sidney Lumet's classic Network (1976), a prescient examination of the media written by Paddy Chayefsky, playing an older version of the character type he had become iconic for in the 1950s, only now more jaded and aware of his own mortality.

In 1974, Holden won a Primetime Emmy Award for Outstanding Lead Actor in a Miniseries or a Movie for his portrayal of a cynical, tough veteran LAPD street cop in the television film The Blue Knight, based upon the best-selling Joseph Wambaugh novel of the same name.

In 1980, Holden appeared in The Earthling with popular child actor Ricky Schroder, playing a loner dying of cancer who goes to the Australian outback to end his days, meets a young boy whose parents have been killed in an accident, and teaches him how to survive. During his last years, Holden also appeared in his second Irwin Allen film, When Time Ran Out, a critical and commercial failure and heavily disliked by Holden himself; his final film, Blake Edwards's S.O.B., was more successful and a Golden Globe-nominated picture.

In 1981 Holden was offered the role of Coach Daniel B. Delaney in That Championship Season. He became very depressed when filming was delayed until 1982, and drank even more heavily.[7]

While in Italy in 1966, Holden killed another driver in a drunk driving incident. He received an eight-month suspended sentence for vehicular manslaughter.[8]

Holden maintained a home in Switzerland and also spent much of his time working for wildlife conservation as a managing partner in an animal preserve in Africa. His Mount Kenya Safari Club in Nanyuki (founded 1959) became a mecca for the international jet set.[9]

Holden was married to actress Ardis Ankerson (stage name Brenda Marshall) from 1941 until their divorce (after many long separations) in 1971. They had two sons, Peter Westfield (born November 17, 1943) and Scott Porter (born May 2, 1946; died January 21, 2005, San Diego, California). He also adopted his wife's daughter, Virginia, from her first marriage.

Holden was best man at the marriage of his friend Ronald Reagan to Nancy Davis in 1952; however, he never involved himself in politics.

Holden met French actress Capucine in the early 1960s. The two starred in the films The Lion (1962) and The 7th Dawn (1964). They began a two-year affair, which is alleged to have ended due to Holden's alcoholism.[10] Capucine and Holden remained friends until his death in 1981.[11]

In 1972, Holden began a nine-year relationship with actress Stefanie Powers, which sparked her interest in animal welfare.[12] After his death, Powers set up the William Holden Wildlife Foundation at Holden's Mount Kenya Game Ranch.[13]

According to the Los Angeles County Coroner's autopsy report, Holden was alone and intoxicated in his apartment in Santa Monica, California, on November 12, 1981, when he slipped on a rug, severely lacerated his forehead on a teak bedside table, and bled to death. Evidence suggests he was conscious for at least half an hour after the fall. It is probable that he may not have realized the severity of the injury and did not summon aid, or was unable to call for help. His body was found four days later.[9]

Holden had dictated in his will that the Neptune Society cremate him and scatter his ashes in the Pacific Ocean. No funeral or memorial service was held, per his wishes.[14]

In 2007, his stepdaughter, Virginia Holden Gaines, wrote a book, Growing Up with William Holden: A Memoir, reliving her memories of life with her father.

In a podcast for Turner Classic Movies (February 2012) singer-songwriter Suzanne Vega revealed that years after she had released her famous song "Tom's Diner", she was told that her line from this song ("I open up the paper, there's a story of an actor who had died while he was drinking, it was no one I had heard of") actually referred to William Holden, and that "You can date Tom's Diner day by the date of his death". William Holden at YouTube

In the film Mona Lisa Smile, students gossip about an affair between their professor Katherine Watson, a California native, and William Holden.

This article uses material from the article William Holden from the free encyclopedia Wikipedia and it is licensed under the GNU Free Documentation License.