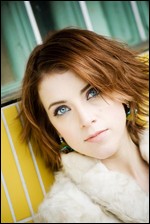 After attending MacRobertson Girls' High School in Melbourne, McEwan started acting, appearing in several television series including Ocean Girl and Funky Squad. In 1991 she was nominated for a Gladys Moncrieff Award for "Outstanding New Talent" by the Music Theatre Guild of Victoria after her performance in Annie. McEwan has also appeared several times in the soap opera Neighbours. Her first role as Sonia came in 1989, then in 1991 she played Sarah Livingston, this was followed by Nicole Cahill in 1995. She played Penny Watts in 2002.[1]

In 2000, McEwan studied at NIDA where she completed a Bachelor's degree in dramatic arts.[2] McEwan moved to the United Kingdom in the 2000s and in 2005 she appeared in Coronation Street where she played Lisa Ditchfield.[1]

After moving to the UK, McEwan started singing and song writing professionally and in 2006 was signed to Mike Batt's Dramatico record label. In 2007, McEwan collaborated with Katie Melua, writing lyrics for What I Miss About You[3] and Dirty Dice[4] which appeared on Melua's third album, "Pictures".[2] Andrea toured the UK in late 2008 supporting Katie Melua. The eleven UK arena shows began on 29 October at Nottingham Arena and concluded on 11 November at the Brighton Centre.

Her debut album[5] "Rental Property"[6] released at end of May 2009[7] by Dramatico Entertainment Ltd.

Now she is living in Berlin and haves her own blog called "Berlin Love Story"[8] talking about her new life at this European capital.

This article uses material from the article Andrea McEwan from the free encyclopedia Wikipedia and it is licensed under the GNU Free Documentation License.