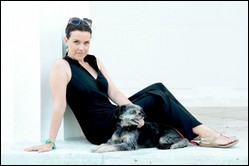 Malin Hartelius was born in 1966 in Malmö, Sweden. She studied at the Conservatory of the City of Vienna (Opera, Lied and Oratorio) with the celebrated teacher Margarethe Bence.

In 1989, Malin Hartelius became a member of the Vienna State Opera Studio and joined the theater of St. Gallen where she sang her first Papagena in Mozart's Die Zauberflöte. As a member of the Vienna State Opera Studio in 1990-1991 season, she appeared in many roles including, Celia in Mozarts Lucio Silla and Papagena. During that season, she made her debut at the Zürich Opera again with Papagena followed by, Arsena in "The Gypsy Baron". In the 1991-1992 season, she became a member of the Zürich Opera and appeared as Pamina in Die Zauberflöte, Adele in Die Fledermaus, Blondschen in Die Entführung aus dem Serail and Ännchen in Der Freischütz.

After debuting at the Ludwigsburger Festspiele (1990) and Schwetzinger Festspiele (1991), Malin Hartelius, appeared for the first time at the Salzburg Festival in 1992 as Barbarina in Le Nozze di Figaro. Upon returning to the Salzburg Festival in 1996, she began her association with conductor Franz Welser-Möst in performances of Bachs Mass in B Minor (BWV 232) and St Matthew Passion (BWV 244) with the Camerata Accademica and in 1997, she sang Blondchen from Mozarts Die Entführung aus dem Serail, under the baton of Marc Minkowski.

In the autumn of 1999, she followed an invitation at the Opéra National de Paris, where she performed the main role in Rameau's Les Indes Galantes under the baton of William Christie. This opera house presented her also as Servilia in La Clemenza di Tito, and in 2000 as Adele in Die Fledermaus. In the same year she also achieved success as Pamina in the new Zauberflöte production at the Opera Zürich.

In recent seasons Malin Hartelius took part as soprano soloist in John Eliot Gardiner's Bach Cantata Pilgrimage (2000), and debuted as Marzelline (Fidelio) at the Munich State Opera. She was highly praised for her appearance in Nikolaus Harnoncourt's realisation of Schubert's rarely played opera Alfonso und Estrella at the Zürich Opera and performed at the Salzburg Festival 2000 in various concerts alongside the Vienna Philharmonic with the conductor Wolfgang Sawallisch and the conductor Charles Mackerras. In the Salzburg Festival 2001 she sang Adele in the new production of Die Fledermaus and concerts with the Mozarteum Orchestra under the direction of Ivor Bolton.

In Spring 2002 she sang Constanze in Die Entführung aus dem Serail in another new production in Zürich with Klaus Maria Brandauer as Bassa Selim and Patricia Petibon as Blonde. In 2004 she made her debut as Zerlina in Don Giovanni at Glyndebourne under the baton of Riccardo Chailly. Her first Susanna in Le Nozze di Figaro was at the festival Aix-en-Provence.

Highlights of last seasons included concerts with the Accademia di Santa Cecilia, Cleveland Orchestra, Concertgebouw Orchestra, Gewandhaus Orchestra, London Symphony Orchestra, Orchester des Bayerischen Rundfunks, Orchestra Giuseppe Verdi, Philharmonia Orchestra, Rundfunk-Sinfonieorchester Berlin and the Tonhalle Orchestra. She returned to the Opéra Bastille de Paris (Les Indes Galantes by Rameau) and sang Sophie (Rosenkavalier) in a new production in Zurich and at the Vienna State Opera, Konstanze as well as Adele at the Bayerische Staatsoper München (Die Fledermaus), she also made her debut as Donna Elvira (Don Giovanni) in Zurich. Invitations to Festivals included the Styriarte Festival 2005 and the Salzburg Festival in 2006 for a series of Mozart operas.

(Litteris et Artibus, From the King of Sweden for outstanding artistic work as an opera singer). (Jan. 2010)

This article uses material from the article Malin Hartelius from the free encyclopedia Wikipedia and it is licensed under the GNU Free Documentation License.

Friedrich Gernsheim Präludium Nr. 6 Allegro molto agitato aus 6 Präludien für Klavier op.2
Update Required To play the media you will need to either update your browser to a recent version or update your Flash plugin.