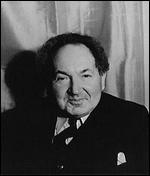 Leopold Godowsky (13 February 1870 – 21 November 1938) was a Polish-American virtuoso pianist, composer, and teacher. He was one of the most highly regarded performers of his time – known for his theories concerning the application of relaxed weight and economy of motion within pianistic technic – principles later propagated by Godowsky's pupils, such as Heinrich Neuhaus.

Ferruccio Busoni expressed that himself and "Godowsky were the only composers to have added anything of significance to keyboard writing since Franz Liszt."

As a composer, Godowsky is best known for his Java Suite, alongside his transcriptions of works by other composers: best known work in the field is 53 Studies on Chopin's Études (1894–1914).[1]

Leopold Godowsky was born to parents of Jewish ancestry,[2] Anna and Matthew Godowsky, in Žasliai in what was then Russian territory but is now part of Lithuania. Godowsky's father, a respected physician, died when he was a child, and he was raised by his mother and foster-parents, Louis and Minna Passinock, in Vilnius.[3]

His talent manifested itself very early, and by age five Godowsky was already composing and becoming proficient on both piano and violin. He gave his first concert at age nine, and toured throughout Lithuania and East Prussia soon afterwards.[1] Although he received a few lessons in his childhood, Godowsky was almost completely self-taught. After briefly studying under Ernst Rudorff at the Königliche Hochschule für Musik in Berlin he left for the United States, where he made his first concert appearance in Boston in 1884.[1]

In 1885–86 Godowsky continued his American career, first playing at the New York Casino, and then, in 1886, embarking on a large tour of north-eastern USA and Canada with violinist Ovide Musin. In 1887 he returned to Europe and gave numerous recitals in Paris and London, eventually becoming a protégé and friend of Camille Saint-Saëns.

In 1890 he returned to the United States and began a pedagogical career by joining the staff of the New York College of Music.[1] On 30 April 1891 Godowsky married Frieda Saxe, a childhood friend.[4] In 1891–93 he held a teaching position at the Gilbert Raynolds Combs's Broad Street Conservatory in Philadelphia, and then settled in Chicago, where he taught at the Chicago Conservatory.[3] By the late 1890s Godowsky was extremely well known in North America.

Together with Teresa Carreño, Godowsky was the first pianist to teach the principle of weight release as distinct from purely muscular momentum; also during the same decade, the first of Godowsky's studies on Chopin études were composed and published, later to become part of a large series, one of Godowsky's most famous works.[1][3] In 1897–98 Godowsky further cemented his fame by giving a series of eight concerts surveying the entire 19th century repertoire.[3]

A particularly successful concert at the Beethoven Hall in Berlin, on 6 December 1900, enhanced Godowsky's reputation greatly. He moved to Berlin, again dividing his time between performing and teaching and giving a concert tour every year. In 1909 he took over Busoni's master classes at the Vienna Academy of Music, where he continued to teach until 1914. Between 1912 and 1914 Godowsky gave several concerts in the United States and also made his first gramophone records there.[1]

In 1914 the outbreak of World War I drove him away from Europe and he went back to the United States, where he lived in New York (1914–16), Los Angeles (1916–19), and Seattle (1919–22), before returning to New York. Much of the 1920s was spent touring around the world; apart from concert appearances in Europe and the United States, Godowsky also gave extensive tours of South America and East Asia.[3]

However, while Godowsky's career prospered, his personal life slowly started falling apart. His wife Friede fell seriously ill in 1924 and her health continued deteriorating ever since. In 1928 Godowsky's son Gordon abandoned his studies and married a vaudeville dancer, causing his father to disown him.

After the Wall Street Crash of 1929 Godowsky's financial situation worsened. A string of recordings the pianist began in London in 1928, as well as public concerts, would have remedied the problem; however, both activities were cut short by an unexpected disaster: during a recording session on 17 June 1930, just after completing Chopin's E major Scherzo,[3] the pianist suffered a severe stroke which left him partially paralysed. Godowsky's remaining years were overshadowed by the event, leaving him deeply depressed.[1]

In December 1932 Gordon Godowsky committed suicide, and a year later Godowsky's wife died of a heart attack. The pianist eventually moved to another apartment in New York together with his daughter Dagmar; he continued playing piano for friends and admirers, but never gave public performances.

In his last years, Godowsky put much effort into organizing a World Synod of Music and Musicians and an International Council of Music and Musicians, but neither project materialized. After spending much of 1937 and 1938 suffering from various health problems, Godowsky died of stomach cancer on 21 November 1938, at the age of 68.[3] He is buried in the Temple Israel Cemetery in Westchester county, New York, near his wife and two of his children.[5]

His daughter, the actress Dagmar Godowsky (1896–1975), also outlived him. During the 1920s she appeared as a co-lead in various Hollywood silent movies, including some with Rudolph Valentino. She was a popular socialite and wrote a humorous autobiography First Person Plural (New York, 1958).

As a composer, Godowsky has been best known for his paraphrases of piano pieces by other composers, which he enhanced with ingenious contrapuntal devices and rich chromatic harmonies. His most famous work in this genre is the 53 Studies on Chopin's Études (1894–1914), in which he varies the (already challenging) original études using various methods: introducing countermelodies, transferring the technically difficult passages from the right hand to the left, transcribing an entire piece for left hand solo, or even interweaving two études, with the left hand playing one and the right hand the other.

The pieces are among the most difficult piano works ever written, and only a few pianists have ventured to perform any of them. Among such pianists are Marc-André Hamelin, who recorded the entire set and garnered a number of prestigious awards, and Francesco Libetta, who performed the complete set in concert (the only pianist to do so from memory)[6] and made a video recording of the set (live in Milan, March 2006). Other pianists who frequently perform Godowsky are Boris Berezovsky and Konstantin Scherbakov.

Other important transcriptions by Godowsky include Renaissance (1906–09), a collection which includes arrangements of music by Rameau and Lully, 12 Schubert Songs (1927), and six transcriptions of Bach's music for solo cello and solo violin, arranged for the same instruments, but with complementary voices, etc.

Although his transcriptions are much more well known, Godowsky also composed a number of substantial original works. He considered the Passacaglia (1927) and a collection of pieces for left hand alone (1930–31) to be his most mature creations; both, however, employ traditional approach to harmony and counterpoint. A more experimental work was the Java Suite (Phonoramas) (1925), composed after a visit to Java, under the influence of gamelan music. Godowsky was equally comfortable writing large-scale works like the Passacaglia or the five-movement Piano Sonata in E minor (1911) as he was creating collections of smaller pieces, such as the 46 Miniatures for piano four hands and the Triakontameron (1920; subtitled "30 moods and scenes in triple measure").

Quite a number of Godowsky's original works were considerably difficult to perform; the Passacaglia (which consists of 44 variations, cadenza and fugue on the opening theme of Franz Schubert's "Unfinished" Symphony) was declared to be unplayable even by Vladimir Horowitz, who claimed it would require six hands to perform.[7] Nevertheless, the work has had a number of recordings.

Despite their traditionalism, Godowsky's compositions may have influenced Maurice Ravel and Sergei Prokofiev.[8]

Godowsky was one of the most highly regarded pianists of his time, praised by listeners, colleagues, and critics alike. Arthur Rubinstein remarked that it would take him "five hundred years to get a mechanism like [Godowsky's]",[9] while Ferruccio Busoni considered himself and Godowsky to be the only composers to have made substantial contributions to keyboard writing and performance since Liszt.

Godowsky's phenomenally difficult transcriptions and impeccable technique prompted some critics to describe him as "a pianist for pianists", as James Huneker has done.[10] Among Godowsky's admirers were such distinguished pianists as Vladimir de Pachmann and Sergei Rachmaninoff, who, according to Godowsky's daughter Dagmar, idolized her father's music and performances.[11]

Even those who disliked Godowsky's interpretations usually acknowledged his tremendous technical gifts: Claudio Arrau, for example, declared Godowsky "one of the greatest technicians", even though he considered his playing "boring" and complained that Godowsky "never played above mezzo-forte."[12]

Godowsky's vast repertoire spanned more than two centuries of music, from contemporary music to that of Rameau and Lully, whose music he transcribed.[3] Although he regularly played public concerts until 1930, Godowsky was plagued by stage fright, and particularly disliked the recording studio, like many performers of his time. On one occasion, he described the recording process thus:

The fear of doing a trifling wrong augmented while playing; the better one succeeded in playing the foregoing, the greater the fear became while playing. It was a dreadful ordeal, increasingly so the more sensitive the artist, I broke down in my health in London in the Spring of 1930, owing to these nerve-killing tortures. How can one think of emotion![13]

Consequently, it was acknowledged that Godowsky's best work was not in public or in the recording studio, but at home. After leaving Godowsky's home one night, Josef Hofmann told Abram Chasins: "Never forget what you heard tonight; never lose the memory of that sound. There is nothing like it in the world. It is tragic that the world has never heard Popsy as only he can play."[14]

This article uses material from the article Leopold Godowsky from the free encyclopedia Wikipedia and it is licensed under the GNU Free Documentation License.