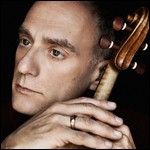 Mark Kaplan is an American violinist who studied at the Juilliard School under Dorothy DeLay. He is currently a professor at Indiana University's Jacobs School of Music. Before teaching at Indiana, Mr. Kaplan taught at UCLA in California.

Mark Kaplan plays a violin made by Antonio Stradivari in 1685, which is named "The Marquis" after the Marchese Spinola, whose family owned the violin for several generations.

This article uses material from the article Mark Kaplan (musician) from the free encyclopedia Wikipedia and it is licensed under the GNU Free Documentation License.