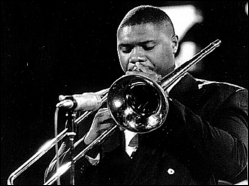 Gordon came from a strongly religious and musical background that influenced the early direction of his music. His late father, Lucius Gordon (1936-1997), had been a church organist at several churches in Burke County, Georgia. His father had also been a classical pianist and teacher. Gordon became particularly inspired in jazz at age thirteen, 1980, by listening to jazz recordings inherited from his great-aunt. The collection included a five-LP jazz anthology produced by Sony-Columbia. In particular, he was drawn to musicians like Louis Armstrong[2] At that age, he was attending Langford Middle School in Augusta, Georgia, and his band director was James K. Staples (born 1958). Gordon graduated in 1985 from Butler High School in Augusta.

His early works as a professional were with Wynton Marsalis, but in recent years he has expanded beyond swing and has experimented with new instruments. The strongest example of this might be The Search where he plays didgeridoo and covers Thelonious Monk songs.[3] He has also played Gospel music.

In 1995, Gordon arranged and orchestrated the theme song for NPR's All Things Considered.[4] Gordon's arrangement and orchestration is the third version of the widely recognized melody composed in 1971 by Donald Joseph Voegeli (1920-2009).

Blues Back Records was an American independent jazz label founded by Gordon in 2006 coinciding with the release of his Rhythm On My Mind album, a collaboration with bassist Jay Leonhart. His desire for full artistic control was the impetus for creating Blues Back. It was during a meeting with Leonhart while Gordon composition "I Want My Blues Back" played in the background, that the two laughed and decided on the name for the company. BluesBack had produced other artists in Wycliffe's universe who met Gordon's criteria for originality. The company, Blues Back Records, Inc., a New York corporation, became inactive in 2011.[5]

This article uses material from the article Wycliffe Gordon from the free encyclopedia Wikipedia and it is licensed under the GNU Free Documentation License.