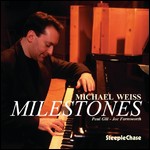 Weiss studied at Interlochen Academy and Indiana University, after which he moved to New York.[1]

In 2000 he was the grand prize winner in the BMI/Thelonious Monk Institute's Composers Competition. In 1989, he won second prize in the Thelonious Monk International Jazz Piano Competition and in 2002, Weiss received a composition commission from Chamber Music America. Jazz Times says Weiss "writes with thought-provoking originality".[2]

As a soloist and bandleader, Weiss has been featured on television and radio programs such as CBS News Nightwatch, Live from Lincoln Center, Jazzset, Piano Jazz, and the Jazz Piano Christmas Special. In addition to performing, composing and recording, Michael Weiss has been committed to jazz education throughout his career. His fourth recording as a leader, Soul Journey, features nine original compositions composed for septet. In October, 2006, Weiss debuted as a leader at the Village Vanguard.

All titles by composed and arranged by Michael Weiss except as indicated.

This article uses material from the article Michael Weiss (composer) from the free encyclopedia Wikipedia and it is licensed under the GNU Free Documentation License.

Georg Philipp Telemann Concerto für 2 Flöten, Streicher und Basso Continuo a-moll
Update Required To play the media you will need to either update your browser to a recent version or update your Flash plugin.