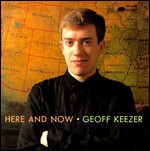 Geoffrey Keezer (born November 20, 1970) is an American jazz pianist. He is a two-time Grammy nominee.

A native of Eau Claire, Wisconsin, Keezer was playing in jazz clubs as a teenager, holding down the piano chair for Art Blakey at age 18, and touring in the company of Joshua Redman, Benny Golson and Ray Brown in his 20s. More recently he has toured with David Sanborn, Chris Botti, Joe Locke and Christian McBride; worked with vocalist Denise Donatelli on projects garnering three Grammy Award nominations, and released a series of albums drawing influences from Hawaiian, Okinawan and Afro-Peruvian folk traditions.

His 2009 CD, Áurea, was nominated for Best Latin Jazz Album;[1] in 2010 he was nominated for Best Instrumental Arrangement Accompanying Vocalist(s) for the track "Don't Explain" on Denise Donatelli's When Lights Are Low.[2] In 2013 Keezer released his first solo piano album in 13 years, Heart of the Piano (Motema Records).

Keezer was born November 20, 1970, in Eau Claire, Wisconsin. Keezer was playing in jazz clubs as a teenager.

In 1989, at age 18, Keezer joined Art Blakey and the Jazz Messengers,[3] becoming the last pianist to join this legendary band. He composed and arranged original music for the group, with which he remained until Blakey's death in 1990. Keezer's debut album as a leader, Waiting In The Wings (Sunnyside) came out in 1989.

Keezer joined the Art Farmer Quartet in 1990[4] The band performed at major North American jazz festivals and jazz clubs. Keezer served as musical director and arranger from 1994-95. In 1997, Keezer became a member of bassist Ray Brown's trio[5] He toured the world with Brown, performing at clubs and major festivals in North America, Japan, Europe and the Middle East. The Ray Brown Trio played concerts with the Israel Philharmonic; the Radio Orchestra of Munich at the Weiner Konzerthaus and Conservatory in Vienna, Austria; and at Lincoln Center in New York City.

Keezer had a busy performing career throughout the 1990s. Highlights include a North American tour with "The Key Players", featuring Mulgrew Miller, James Williams, Harold Mabern & Donald Brown;[6] a performance of Gershwin's Rhapsody In Blue with the Hollywood Bowl Orchestra;[7] a concert with the Gerry Mulligan Quartet at London's Albert Hall; a concert at Lincoln Center with Art Farmer and Wynton Marsalis; and performances with the Carnegie Hall Jazz Orchestra, the Slide Hampton All-Stars, Dizzy Gillespie, J.J. Johnson and many others. He also traveled many times to Japan, where he played with Ray Brown, Michael Brecker, Pat Metheny and Kenny Burrell, among others.

Keezer's career as a leader continued in the 1990s. His second album, Curveball, came out in 1990 and featured Victor Lewis on drums; Charnett Moffett on bass and Steve Nelson on vibes. He returned the next year with Here & Now (Somethin' Else, 1991); followed by World Music (DIW, 1992); Other Spheres (DIW, 1993); Trio (Sackville, 1995); a duet album with Harold Mabern called For Phineas (Sackville, 1996); and Turn Up The Quiet (Sony, 1997), which featured rising stars Diana Krall, Joshua Redman and Christian McBride. Keezer also appeared on many albums as a sideman.

From 2000-2009 Keezer performed on keyboards and piano in the Christian McBride Band.[8] The band toured North America, Europe and Japan. Keezer contributed original compositions and arrangements to the band. Concurrently, starting in 2002, Keezer joined saxophonist Tim Garlands Storms/Nocturnes project.[9] The band played throughout the United Kingdom, including at Queen Elizabeth Hall in London; the Hollywell Music Room in Oxford; the Royal Northern College of Music in Manchester; and at the Cheltenham Jazz Festival. In 2004, Keezer traveled to Lima, Peru, to play with Maria Schneider.[10] This visit to Peru would later provide the inspiration for his GRAMMY-nominated album Aurea.

The following year saw Keezer again touring the world, this time with saxophonist David Sanborn.[11] Then in 2007, Keezer began playing with Grammy Award-winning trumpeter Chris Botti, a relationship that continues to this day.[12] That same year, Keezer received a grant from Chamber Music America to develop a new jazz work.[13] In 2009, Keezer joined the band of fellow Art Blakey alumnus Wayne Shorter, subbing for an injured Danilo Perez. Keezer played at the Playboy Jazz Festival and at festivals in Ottawa and Montreal as a member of the Wayne Shorter Quartet.[14]

Keezer spent a lot of time in the recording studio in the 2000s. His albums from this period include the solo piano recording Zero One (Dreyfuss, 2000), as well as Sublime: Honoring the Music of Hank Jones (Telarc, 2003), a series of duets with pianists Kenny Barron, Chick Corea, Benny Green and Mulgrew Miller. Other albums include Falling Up (MaxJazz, 2003) with Hawaiian slack key guitarist Keola Beamer; Free Association (ArtistShare, 2005) with guitarist Jim Hall; Wildcrafted: Live at the Dakota (MaxJazz, 2005); Live In Seattle (Origin, 2006); an album with Okinawan singer Yasukatsu Oshima; a collaboration with electronica artist Mary Acheta called The Near Forever (2009); and Áurea (ArtistShare, 2009), which was nominated for a 2009 Grammy Award for Best Latin Jazz Album.[1]

In 2010, Keezer was nominated for his second Grammy Award, for Best Instrumental Arrangement Accompanying Vocalist(s), for the track "Don't Explain" on Denise Donatelli's When Lights Are Low.[2] From 2012-2013, Keezer played concerts in Hawaii and across North America as part of the "Malama Ko Aloha" tour featuring Hawaiian slack-key guitarist Keola Beamer and native American flute player R. Carlos Nakai.[15]

Recordings from this period include Mill Creek Road (SBE, 2011); Via (Origin, 2011) with Joe Locke on vibes and Tim Garland on saxophone; Signing (Motema, 2012) also with Locke; and his latest solo piano recording, Heart of the Piano (Motema, 2013).

Keezer has appeared on television many times during his performing career, starting in 1989 when he played on German television with Art Blakey. In 1995, Keezer appeared on NBC's Today Show as part of the Terence Blanchard Quintet. In the late 1990s, Keezer played on German, French and Swiss TV as a member of the Ray Brown Trio. In 2000, he joined Ingrid Jensen on BET's Jazz Central Station. Keezer appeared on Japan's NHK in 2005 during their coverage of that year's Tokyo Jazz Festival. In 2012, Keezer played on ABC's Good Morning America and The View in a band with trumpeter Chris Botti and country star Vince Gill.[16] In the fall of 2013, Keezer will play on six episodes of ABC's Sing Your Face Off.

Keezer has been active as an educator throughout his career. He currently offers online jazz piano lessons at KeezersPianoLessons.com. He has taught and given master classes at many institutions including the Brubeck Institute, the Royal Academy of Music, the Thelonious Monk Institute of Jazz, The New School, the Stanford Jazz Workshop, Indiana University, Michigan State University, the Jazzschool, Jazz Aspen, the Amsterdam College for the Arts, the Guildhall School of Music and The Hartt School of Music.

"I believe that expressing oneself through music is a reason to live," Keezer said, "and that jazz improvisation is a skill anyone can learn not just a special gift reserved for the privileged few. Over the past twenty years, Ive had the opportunity to study and perform with the great masters of jazz, and now I feel its my responsibility to pass this knowledge on to future generations so that jazz remains a vital and evolving art form."

This article uses material from the article Geoffrey Keezer from the free encyclopedia Wikipedia and it is licensed under the GNU Free Documentation License.