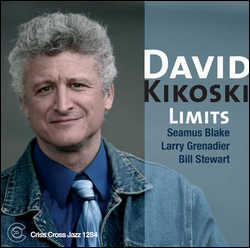 Kikoski learned piano from his father and played with him in bars as a teenager. He studied at the Berklee College of Music in the early 1980s, then moved to New York City in 1985, touring and recording subsequently with Roy Haynes (from 1986), Randy Brecker (198688), Bob Berg (1988), and Billy Hart (1989). He has also played or recorded with George Garzone, Barry Finnerty, Red Rodney, Craig Handy, Ralph Moore, Didier Lockwood, Joe Locke, Olivier Ker Ourio and Mingus Big Band. Kikoski won a 2011 Grammy Award with the Mingus Big Band for the Best Live Jazz Ensemble Album, "Live at the Jazz Standard". He also had a Grammy nomination with Roy Haynes for the "Birds of a Feather" CD.

This article uses material from the article David Kikoski from the free encyclopedia Wikipedia and it is licensed under the GNU Free Documentation License.