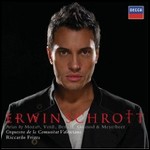 Erwin Schrott (born 21 December 1972 in Montevideo, Uruguay) is an operatic bass-baritone, particularly known for his interpretation of the title role in Mozart's Don Giovanni.[1]

Schrott studied singing with Franca Mattiucci. He made his professional debut in Montevideo at the age of 22, singing Roucher in Andrea Chénier. Following a stint at the Teatro Municipal in Santiago, Chile, where he sang Timur in Turandot, Colline in La bohème, Sparafucile in Rigoletto and Ramfis in Aida, he won a scholarship to study in Italy.[2]

Schrott's performances on the concert stage include a joint concert with Anna Netrebko conducted by Plácido Domingo in the Centro de Bellas Artes, San Juan, Puerto Rico (9 October 2007),[4] a gala concert for the 5th Abu Dhabi Music and Arts Festival, with Anna Netrebko and Elna Garana (29 March 2008),[5] and a solo concert in the Münchner Residenz (9 November 2008).[6]

Erwin Schrott was the partner of the Russian soprano Anna Netrebko. They never married, and in November 2013, Netrebko announced that she and Schrott had separated amicably.[7][8] Their son, Tiago Aruã, was born on 5 September 2008 in Vienna.[9] In addition to joint concerts in Puerto Rico, Abu Dhabi and Riga, Netrebko and Schrott appeared together in Don Giovanni with the New York Metropolitan Opera's Japan Tour in June 2006[10] and at the Royal Opera House in June 2007.[11]

In April 2008, concert promoter Ian Rosenblatt said that he was planning to sue Schrott for breach of contract when he cancelled his appearance in the Rosenblatt Recital Series for 11 June 2008 at Cadogan Hall.[12] The dispute was settled out of court in August 2008 when Schrott agreed to make a donation to charity.[13]

This article uses material from the article Erwin Schrott from the free encyclopedia Wikipedia and it is licensed under the GNU Free Documentation License.