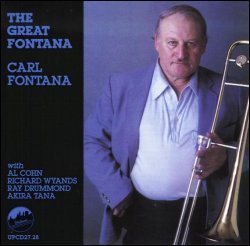 Carl Charles Fontana (July 18, 1928 - October 9, 2003) was an American jazz trombonist. After working in the big bands of Woody Herman, Lionel Hampton, and Stan Kenton, he devoted most of his career to playing music in Las Vegas.

His first break into the professional jazz scene came in 1951 when he was hired to stand in for one of Woody Herman's regular trombonists, Urbie Green. When Green returned, Herman kept Fontana on as a permanent member of the band.

After 1958, Fontana would tour rarely, such as a 1966 tour of Africa with Herman's band sponsored by the U.S. State Department. He primarily performed with house orchestras in Las Vegas during the 1960s, particularly Paul Anka's band (with Frank Rosolino). He also performed in bands backing Sammy Davis Jr., Tony Bennett, Wayne Newton, and the Benny Goodman orchestra.

In the 1970s, he continued performing in house orchestras and lounges in Las Vegas. He also recorded with Louie Bellson, Bill Watrous, and Supersax. It was not until 1975 that Fontana recorded an album as an ensemble co-leader. He shared the billing for this record, The Hanna-Fontana Band: Live at Concord (Concord Jazz) with drummer Jake Hanna. Fontana toured in Japan with this ensemble. In 1978 he was featured on the jazz trombone recording Bobby Knight's Great American Trombone Company, with Charles Loper, Lew McCreary, Frank Rosolino, Phil Teele, and Bobby Knight.

In the 1980s, he appeared regularly on National Public Radio's Monday Night Jazz program. His first album as a headliner was The Great Fontana (Uptown Jazz, 1985).

In 2001 he joined The West Coast All Stars and played a concert in Stuttgart, Germany. He was joined by Conte Candoli, Teddy Edwards, Pete Jolly, Chuck Berghofer, and Joe LaBarbera. He was featured on the song "If I Only Had a Brain", from the movie The Wizard of Oz.

This article uses material from the article Carl Fontana from the free encyclopedia Wikipedia and it is licensed under the GNU Free Documentation License.