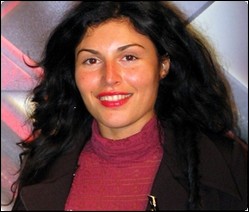 Giusy Ferreri (Italian: [ˈdʒuːzi ferˈrɛːri]; born Giuseppa Gaetana Ferreri on 17 April 1979) is an Italian singer-songwriter. In 2008, Ferreri took part at the first Italian edition of the talent show X Factor, in which she came second.

In June 2008, Sony BMG Italy released the debut EP by Ferreri, which includes her first single "Non ti Scordar mai di me" written by Italian pop singer Tiziano Ferro, and five covers of classic songs from the 1960s and 1970s. The single held the number one position of the Italian singles chart for an impressive fifteen consecutive weeks, becoming one of the most successful tracks ever on that chart. The album debuted at the top spot of the Italian album chart and stayed there for eleven consecutive weeks. It went on to be certified 4x platinum denoting over 314,000 copies shipped.[2] She is considered to be the Italian version of Linda Perry.

In October 2008, the song Novembre, the first single from Ferreri's official debut album Gaetana, was released. The tune debuted at number one in Italy and held the top for eight weeks so far. The album was released on 14 November 2008. It debuted at number one on the iTunes Italy chart and subsequently peaked at #2 on the Italian FIMI albums chart, selling over 80,000 copies in its first week of release.[3] The album sold so far over 706,000 copies in Italy and Greece. The second single from the album, "Stai fermo lì", was announced on 8 January 2009 and was released in Italy on 16 January 2009. The third single off the album was "La Scala (The Ladder)", originally written by Linda Perry and translated in Italian by singer Tiziano Ferro. The song peaking at #27 on the FIMI singles chart and at #49 on the Greece Singles Chart.

On 20 November 2009 her second studio album was released across Europe, debuting at #10 on the Italian FIMI albums chart. The first single is a cover of "Ma il cielo è sempre più blu" by Rino Gaetano.

In her second studio album, Ferreri records cover versions of some of her favourite (Italian and international) artists: "La magia è la mia amante (I Was Made to Love Magic)" by Nick Drake, "Con una rosa" by Vinicio Capossela and Paolo Benvegnù, "Il mare verticale (Portrait the Sea)" by Jerome Kern, "Yesterdays" (song played in the past by Billie Holiday), "Ciao amore ciao" by Luigi Tenco and Estate by Bruno Martino.

On 16 February 2011[4] her third studio album was released across Europe, debuting at #13[5] and peaked at #11[6] on the Italian FIMI albums chart and #98[7] on the Swiss Album chart. The first single is "Il mare immenso" released on the very same day,[8] written by Bungaro. The first single taken from her third studio album debuted at #8[9] and peaked at #6[10] on the FIMI Top 10 Singles Chart. "Il mare immenso" stayed for three months into the top fifty of the FIMI Singles Charts.

This article uses material from the article Giusy Ferreri from the free encyclopedia Wikipedia and it is licensed under the GNU Free Documentation License.