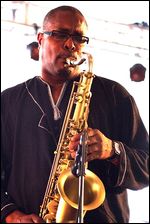 Toussaint learned to play calypso as a child, and attended the Berklee College of Music in the late 1970s. In 1979 he played with Wallace Roney, and from 1982 to 1986 he was a member of Art Blakey's Jazz Messengers, for which he is best known.[1] Since 1987 he has lived in London, where he has taught at Guildhall School of Music and Drama and performed with many local musicians, in addition to internationally known jazz players such as Wynton Marsalis, McCoy Tyner, and the Gil Evans Orchestra. He has also taught at Trinity College of Music and the Birmingham Conservatory.

This article uses material from the article Jean Toussaint from the free encyclopedia Wikipedia and it is licensed under the GNU Free Documentation License.