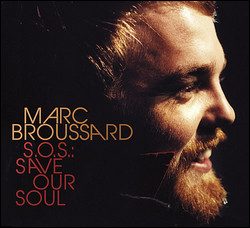 Marc Broussard (born January 14, 1982) is an American singer-songwriter. His style is best described as "Bayou Soul," a mix of funk, blues, R&B, rock, and pop, matched with distinct Southern roots. In his career, he has released five studio albums, one live album, three EPs, and has charted twice on Hot Adult Top 40 Tracks.

Marc Broussard is the son of acclaimed Louisiana Hall of Fame guitarist and former member of The Boogie Kings, Ted Broussard.[1] Marc was raised in Carencro, Louisiana and Lafayette, Louisiana.[2]

In 2001 Broussard was part of Y, a Christian band. The short-lived band was based out of New Iberia, Louisiana. Broussard's solo career started with the release of several independent efforts, including 2002's Momentary Setback[2] which spawned the hit "The Wanderer", a song about self-discovery. A re-worked version of the song appears on his first major album Carencro (Island Records). It was released on August 3, 2004. The album's title pays tribute to the musician's hometown of Carencro, Louisiana, where he still resides.[1]

In 2007, he released S.O.S.: Save Our Soul, an album consisting almost entirely of cover songs. The album was his first to reach the top 100 of the Billboard 200 in the U.S., debuting and peaking at #96: this had the effect of "graduating" him from the Top Heatseekers chart, which consists of albums by artists who have never reached the top 100.

Broussard finished recording the Must Be The Water EP on the Rock Boat VII in January 2008. He was no stranger to The Rock Boat, which is an annual cruise and music festival. This was Broussards first release with his new label, Atlantic Records, with which he signed a multi-album contract in 2007.

Broussard's music has been featured on shows such as Clash of the Choirs in which "Home" was performed by a Blake Shelton led choir. Singer Kelly Clarkson performed "Home" as part of her live setlist in 2006-07.[3] Most recently, "Must Be the Water" was the theme song for the 2008 NBA All-Star Game. Broussard has been a featured performer on many TV programs including The Tonight Show with Jay Leno, A&E Breakfast with the Arts, Jimmy Kimmel Live!, Late Night with Conan O'Brien, CBS Saturday Early Show, Larry King Live "Lopez Tonight", and CBSs Saturday Mornings Second Cup Cafe.

In 2008, he released his third full-length studio album, Keep Coming Back. The song "Hard Knocks" from this album was featured in the last episode of the 2009 season of Hard Knocks on HBO featuring the Cincinnati Bengals.

Broussard married his wife, Sonya, on The Rock Boat VII in January 2008. They have four children. Their oldest son, Gavin, was the inspiration for Marc's song Gavins Song[8] which was co-written by Dave Barnes. Another son, Gibb,[8] was named after musician Gibb Droll who often toured with Broussard. A daughter, Evangeline Rose, followed,[1] and their youngest is a daughter, Ella Grace.[8]

This article uses material from the article Marc Broussard from the free encyclopedia Wikipedia and it is licensed under the GNU Free Documentation License.