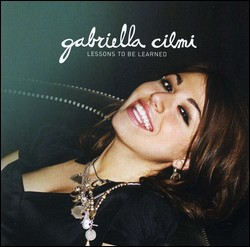 Gabriella Cilmi was born in the Melbourne suburb of Dandenong, of mostly Italian family with some Arbëreshë (Albanian) heritage.[8][9] She moved to London with her family when she was fifteen, where she currently lives with her parents Paula and Joe (whose origins are in Calabria and Sicily, Italy) and her brother Joseph. At an early age, Cilmi developed an interest in a wide range of pop music acts, including Nina Simone, Led Zeppelin, Janis Joplin, Sweet, T. Rex and Cat Stevens.[10] She has also cited Suzi Quatro as a particular influence.[11] Despite her natural aptitude and vocal talent, Cilmi was told that she lacked the discipline necessary to pursue a singing career. Idolising Janis Joplin, during this time she sang with a band (Foucault) covering songs by Led Zeppelin, Jet, Silverchair and others.[12] Cilmi recorded original songs with writer/producers Barbara and Adrian Hannan of The SongStore.[13]

In 2004, Cilmi captured the attention of Warner Music executive Michael Parisi while giving an impromptu rendition of the Rolling Stones' song "Jumpin' Jack Flash" at the Lygon Street Festa, a community festival in Melbourne. At the age of 13, Cilmi travelled to the US and UK with Adrian Hannan and was offered four major US deals. She eventually signed a contract with Island Records UK.

The tracks "Don't Tell Me" and "Sorry", co-written with Barbara and Adrian Hannan, appeared on the soundtrack of 2005 Australian film Hating Alison Ashley.[13] Cilmi shared a manager (Cassandra Gracey), writer/producers (Xenomania) and UK record label (Island) with the Sugababes, and supported former Sugababe Mutya Buena at the Jazz Café in London in 2007. She made her UK TV debut in December 2007 when she sang her single "Sweet About Me" on Later... with Jools Holland. The same month, Cilmi's song "Sanctuary" featured in the film St Trinian's and on its soundtrack. Cilmi recorded the theme to UK TV series Echo Beach, which aired in early 2008 on ITV1; it is a cover of "Echo Beach" by Martha and the Muffins. In February 2008, she supported the Parisian band Nouvelle Vague on their UK tour.

Cilmi's first album, Lessons to Be Learned, was written and recorded with hit production team Xenomania and was released in March 2008 in the UK. Cilmi has been compared to Amy Winehouse.[14] The first single, "Sweet About Me", debuted on the UK Singles Chart that month and climbed to number six three months later, in June. It reached number seventeen on the Irish Singles Chart, and peaked at number one on the Australian ARIA Singles Chart. The song was used in a worldwide advertising campaign for the deodorant Sure/Rexona.[15] Cilmi's second UK single, "Save the Lies", was not as successful as "Sweet About Me", peaking at number thirty-three in the UK. In Australia, the second single from the album was "Don't Wanna Go to Bed Now", which reached number twenty-eight. The subsequent single, "Sanctuary", was issued in November 2008 and failed to chart.

From March to May 2008, Cilmi supported the Sugababes on their UK Change Tour. She opened for James Blunt on his June 2008 Australian tour, and participated in the October 2008 MTV Greece concert alongside R.E.M. and Kaiser Chiefs. Also in 2008, Cilmi won six ARIA Music Awards in Australia, taking Best Female Artist, Breakthrough Artist – Single ("Sweet About Me"), Breakthrough Artist – Album (Lessons to Be Learned), Best Pop Release (Lessons to Be Learned), Highest Selling Single ("Sweet About Me"), and Single of the Year ("Sweet About Me"). Cilmi covered the Connie Francis song "Warm This Winter", originally a minor hit for Francis in 1962 as "I'm Gonna Be Warm This Winter", for Co-operative's Christmas 2008 advertising campaign;[16] released as a single, it reached number twenty-two on the UK Singles Chart. In January 2009, Cilmi was nominated in the International Female category at the BRIT Awards[17][18] and sang in the Rod Laver Arena before the 2009 Australian Open Men's Final.

Cilmi performed at the Melbourne Cricket Ground in March 2009 for Sound Relief, a multi-venue rock music concert in support of relief for the Victorian bushfire crisis.[19][20] The event was held simultaneously with a concert at the Sydney Cricket Ground.[19] All the proceeds from the Melbourne Concert will go to the Red Cross Victorian Bushfire relief.[19][20] Cilmi made her U.S. television debut in March 2009 and performed on the Pyramid (main) stage at the Glastonbury Festival in June 2009. The following August, she won Grand Prix at Sopot International Song Festival, an international song contest in Poland.

The lead single of Gabriella Cilmi's Ten was "On a Mission". It was released on 5 February 2010 in Australia and on 7 March 2010 in Europe. As soon as the song was broadcast on Australian radios, it reached number-one most added track to Australian radio in its second week of release, getting played 296 times. The song reached number 9 on the UK Singles Chart and number sixteen in Australia.

The new album Ten was planned for 22 March 2010 and Cilmi said it would feature "lots of uptempo funk and disco-inspired numbers designed to make people groove", referring to "On a Mission", "Hearts Don't Lie", and "Love Me Coz", as well as "some more sexy tracks" probably referring to "Superhot" and "Invisible Girl". The song "Boys" incorporated a type of yodel into it.[21] The song "Let Me Know" was described as the "Lessons To Be Learned-ish" song of the album. It also featured a new version of "Sweet About Me", with some disco/electronic style to show the change in her music.

While producing the album, Cilmi worked with Greg Kurstin, The Invisible Men and Dallas Austin, as well as Xenomania. She made her debut in producing with the track "Love Me Coz", saying that it was the song she was most proud of due to the fact it was produced with her band.[21] It featured production from Xenomania, Dallas Austin and Greg Kurstin, and bore an electropop sound in contrast to her first album, which had more of a pop/rock style.

Ten was not as successful as Lessons to Be Learned, reaching number 17 in Australia and number 28 in the UK. In an interview, Cilmi explained that the sales were not her first concern; however, she expressed regret about posing topless for FHM magazine during the publicity for the album.

The second single, "Hearts Don't Lie", was released in June 2010 in the UK.[22][23] The third single, "Defender", was released in August 2010 accompanied by a b-side track, "Magic Carpet Ride", but both singles failed to make impact on the charts. Gabriella's version of "Magic Carpet Ride" was featured over the closing credits of British film Soulboy. Cilmi supported English singer Leona Lewis on the UK leg of her 2010 The Labyrinth Tour.

Popjustice named Ten as their fourth best album of 2010.

2010–present: The Sting and All Kings and Queens

By October 2010, Cilmi had already begun work on her third studio album. She has been quoted as saying: "It's totally exciting because I am spending a bit more time with this record. I want to see what works. I really love Dolly Parton, roots music, Tricky and Enya, so anything could happen."[24]

On 20 January 2012, Cilmi released an acoustic version of a song from her album, "Vicious Love". It is played in a clip video where she sings with her band and walks around an Italian restaurant with sunglasses. Two days after the broadcast, she says: "This is an 'Acoustic-ish' version of a tune that will be on the new record, one that I love very much". The song has blues influences, contrasting the disco-inspired pop sound of Ten. Cilmi claims she felt pressured into adopting a more sexual image, which prompted her to part ways with Island Records and her management team.[25][26] She also told the Herald Sun that the lacklustre commercial reception of her second album, Ten, taught her not to compromise herself or her music: "It was an awakening for me to realise the position I am in to make the record that I want to make and just stand up for myself."[27]

On 22 January 2012, Cilmi explained how the song "Vicious Love" was inspired. She states: "If you've ever experienced any type of 'Vicious Love' you will know that sometimes despite all the arrows pointing to a dead end there is just no way out, there is no way back. But then again don't all roads lead to dead ends? Guess we should just enjoy the ride..."[28] In March 2013, Cilmi first performed "Sweet About Me", as well as two new songs "Come Wander With Me" and "Sweeter in History", at the Moxafrica Festival. On 15 March, the clip from her new single "Sweeter in History", is shown on her YouTube page. It was shot in Italy, precisely in Cassino and Valvori, Lazio. In July 2013, Cilmi announced a new track called "The Sting", released on 2 September as the album's lead single.[26] The artwork of the single was revealed on 15 July 2013, picturing Cilmi in black and white, in front of a flower field. Cilmi's third studio album, The Sting, was released on 4 November 2013 on her own UK-based imprint Sweetness Tunes, in association with Absolute Marketing & Distribution.[29] "Symmetry" was released on 11 November as the album's second single.[30]

In April 2015, Cilmi announced that she would be performing with her brother Joseph under the name All Kings and Queens, and released the single "Voodoo" in September 2015.[31][32]

Cilmi has a contralto vocal range and has been compared to Anastacia and Amy Winehouse for her vocal stylings.[33][34] Cilmi also discovered her sound was partly caused by a back problem, known as hollow back or lordosis, which affects the way in which she uses her diaphragm muscles when singing, producing a more throaty sound.[34] In a review for Ten, Caroline Sullivan of The Guardian complimented her voice stating it as 'precociously blistering' and 'Her zest and powerful voice can't be faulted'.[35] Take40 commented further 'a voice that sounds like it fell from the heavens' further noting her abilities as a 'vocal powerhouse' and being a 'brilliant and unique vocal talent'.[36] She describes her music as "Quite vulnerable and compromised" [37] She discusses relationships that were doomed to fail on her the Sting album, which deals with her upset with career and relationship failures. [38] [39] She also had experimented with campy electro pop and a Morodor -ish "Love Me Cos You Want To". [40] Ten, her second album is her tribute to disco and EDM pop, highlighted by Invisible Girl discussing being someones "Dirty Little Secret" [41]

In 2008, "Sweet About Me" was released in Simlish (Sim speak) as part of The Sims 2 expansion pack Apartment Life's soundtrack.[42] Gabriella is mentioned in Ed Sheeran's song "You Need Me, I Don't Need You".[43] Her song "Sorry" is featured in the 2005 movie Hating Alison Ashley.

This article uses material from the article Gabriella Cilmi from the free encyclopedia Wikipedia and it is licensed under the GNU Free Documentation License.