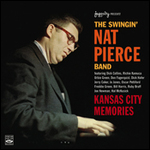 Nat Pierce (July 16, 1925 – June 10, 1992) was an American jazz pianist and arranger born in Somerville, Massachusetts, perhaps best known for being pianist and arranger for the Woody Herman band from 1951-1955. Pieces by Pierce were predominantly created for use in big bands.

Following schooling at the New England Conservatory and working as an amateur musician in the Boston area, Pierce then led his own band which featured Charlie Mariano from 1949-1951. After working with Woody Herman from 1951-1966 as chief arranger and assistant road manager, Nat took residence in New York City and freelanced with musicians such as Pee Wee Russell, Lester Young, Emmett Berry and Ruby Braff, to name a few. From 1957-1959 Pierce led a band off and on which featured Buck Clayton, Gus Johnson and Paul Quinichette. He recorded with a number of other well-known musicians as well, including Quincy Jones, Coleman Hawkins and Pee Wee Russell. Pierce was noted for his ability to play piano in the Basie style and appeared on many releases by Basie sidemen. Pierce also arranged the music for The Sound of Jazz, a 1954 CBS television special hosted by John Crosby.

Pierce died of complications from an abdominal infection in Los Angeles, California.[1]

This article uses material from the article Nat Pierce from the free encyclopedia Wikipedia and it is licensed under the GNU Free Documentation License.