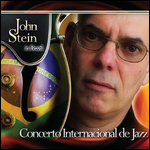 John Stein, is a jazz guitarist, born and raised in Kansas City, Missouri. His education includes a Bachelor of Music from Berklee College of Music in Boston, Massachusetts, where he is an associate professor.

Stein associates with such Boston jazz musicians as Bill Pierce, Kenneth Weinberger, John LaPorta, and Bob Freedman. He has performed onstage with David "Fathead" Newman, Lou Donaldson, Dr. Lonnie Smith, Johnny Vidacovich, and Idris Muhammad. He has also performed concerts in Europe, conducting tours in Germany, France and Switzerland, in Brazil, as well as in the United States. Stein's compositions and performances are a range of jazz, including blues, bebop, bossas, and swing.

This article uses material from the article John Stein (guitarist) from the free encyclopedia Wikipedia and it is licensed under the GNU Free Documentation License.