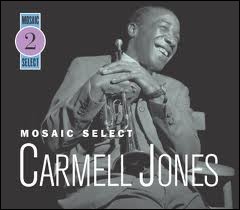 Jones was born in Kansas City, Kansas. He moved to California in 1960 and worked as a studio musician for several years. He released two albums as a leader for Pacific Jazz at this time, while recording as a sideman with Bud Shank, Onzy Matthews, Curtis Amy, Harold Land, and Gerald Wilson.[1] He appeared on Horace Silver's 1965 Blue Note album Song for My Father. In 1965 he moved to Germany where he lived for 15 years, working with Paul Kuhn and the SFB Big Band (Sender Freies Berlin) from 1968 to 1980. There he worked with musicians such as Milo Pavlovic, Herb Geller, Leo Wright, Rudi Wilfer and Eugen Cicero. Jones returned to the US in 1980, working as a teacher and appearing at local clubs in Kansas City. He released one additional album as a leader in 1982. Jones died on November 7, 1996 in Kansas City at the age of 60.[2]

In 2003, Mosaic Records released a three-CD set of Jones material in their Mosaic Select series.[3]

This article uses material from the article Carmell Jones from the free encyclopedia Wikipedia and it is licensed under the GNU Free Documentation License.

Pjotr Iljitsch Tchaikovsky Tanz der kleine Schwäne aus dem Ballett "Schwanensee"
Update Required To play the media you will need to either update your browser to a recent version or update your Flash plugin.