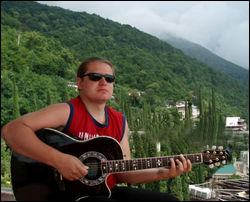 Roman Miroshnichenko (Russian: ) (born June 4, 1977) - is a Russian virtuoso guitarist, composer, and band leader who has won multiple awards. He is one of the most prominent musicians of contemporary jazz[1] on ex-USSR territory and Eastern Europe. Roman is a phenomenal guitarist who has his own and highly individual touch and stamp on the guitar,[2] improvisation flight and melodic tunes all captured in his well-mixed recordings and enthralling live performances. Improvisational thinking and stylistic flexibility allow him to easily to flow into any project and even record very complex guitar parts impromptu in studio. Roman Miroshnichenko has performed, recorded or cooperated with Al Di Meola,[3] Larry Coryell,[4] Frank Colon, Heather Headley, Dominique Di Piazza, Charlie Bisharat, Daniel Piazzolla, João Donato, Djivan Gasparyan, Milcho Leviev, Marco Mendoza, Augusto Enriquez, Saskia Laroo, among many others... Roman is an official Ovation Guitars, [5] PRS Guitars, [6] D'Addario strings, [7] Roland Corporation, Orange, IK Multimedia and DPA Microphones artist. Roman is the founder and the leader of RMProject. He and his band often tour CIS and Europe and Roman is a frequent visitor and headliner to the most prestigious jazz festivals.

Performances at the festivals

As a sessional guitarist

"...Good effort! Nice ideas here and there! I am flattered when Roman uses his ideas with my influence..." / Al Di Meola /

"...Temptation" is an excellent piece of the type of modern flamenco music that John McLaughlin and I played with Paco de Lucia in the late seventies in Europe. Roman Miroshnichenko, in his tribute to this style of music, stays very close to the original guidelines that make this an authentic piece of creativity and not simply a copy...." / Larry Coryell /

"...I am very proud to be part of this magnificent work that is "Temptation". I doubt that someone will not yield to the temptation to listen to it over many, many times throughout life. Roman is one in a million: highest musical knowledge, humility, talent and professionalism. "Roman Rocks..." / Latin Grammy owner, Daniel Figueiredo /

"...Roman is a phenomenal acoustic guitarist. His style is reminiscent of the great Al Dimeola, but of course Roman puts his own and highly individual touch and stamp on the guitar. His Temptation CD is a testament to his brilliance. Its a tour de force!..." /www.acousticguitarworkshop.com/

"...The guitar stands out, but the overall atmosphere is fresh, modern and lively. He may have performed with Al DiMeola and Larry Coryell, but this is not the simple fusion jazz that I remember. It is almost fully instrumental and creates a nice atmosphere for fans of pyrotechnic guitar playing as well as creative intellectual music..." /FolkWorld Magazine about "Quasipsychedelic" CD/

This article uses material from the article Roman Miroshnichenko from the free encyclopedia Wikipedia and it is licensed under the GNU Free Documentation License.